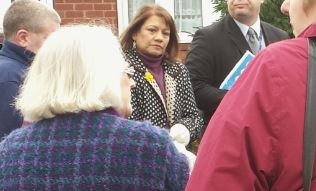 Residents of Walstead Road and West Bromwich Road and I met on Friday 6 November 2015 with Mr Steve Pretty, Head of Engineering and Transportation for Walsall MBC.

Residents of Walstead Road are experiencing difficulties with the speed humps and traffic islands which were installed on the road in 2013. The positioning of the humps and the traffic islands which are positioned between them makes it difficult for them to reverse out of their driveways. They have also resulted in damage to cars, created hazards for motorcyclists and noise and vibrations for residents.

The meeting with Mr Pretty was productive. Residents made clear to him the difficulties they have faced. He said that he would review the use of speed humps.

At West Bromwich Road, residents have had to put up with many motorists travelling well in excess of the 30mph speed limit on the road. There have been a number of serious incidents there in recent years. I was pleased that Mr Pretty was positive about the possibility of locating a “Watchman” sign on West Bromwich Road which would display a warning along with the registration number of drivers travelling in excess of the speed limit.