HomeNewsGovernment cuts millions in grants to Walsall MBC since 2010

Government cuts millions in grants to Walsall MBC since 2010 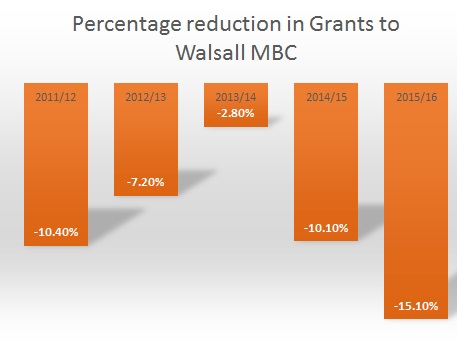 I asked for figures for the grants from Central Government to Walsall MBC. This grant enables local authorities to provide services for local people. The figures from the House of Commons Library make disappointing reading for Walsall.

Because the responsibilities funded through the grant change each year it is not possible to directly compare funding in different years. To address, this adjusted figures have been published. These show that the grant to Walsall MBC has fallen by 15.1% in 2015/16 compared with 2014/15. This is equivalent to a cut of £22.6 million or £83.90 per year per head for everyone living in Walsall according to the 2011 Census.

The Government is now encouraging local authorities to join together as Combined Authorities under a directly elected mayor in return for greater powers and money in areas including transport and additional funding. Local authorities would only be receiving the money that the graph above shows has been withheld from them. There is a danger that this leaves local authorities with little choice but to join combined authorities which in my view are not in the interests of residents and removes local decision making.

This is the breakdown of funding for each of the last five years: