HomeNewsNationality and Borders Bill 7 and 8 December

Nationality and Borders Bill 7 and 8 December 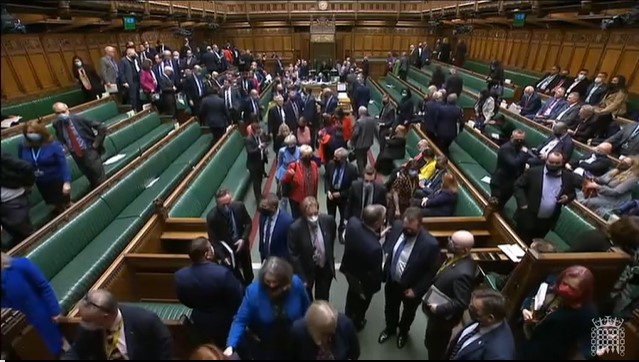 The Nationality and Border Bill was debated on Tuesday 7 December and Wednesday 8 December 2021.

On Tuesday 7 December, New Clause 2 would allow anyone who is descended from a person born before 1983 on the British Indian Ocean Territory to register as a British Overseas Territories citizen. They may also register as a British citizen at the same time. Both applications would be free of charge. This was  lost  Ayes-245 and Noes-309.

New Clause 8 related to British citizenship registration fees for children:  In respect of children registering as British citizens, this new clause would prevent the Home Office from charging a fee which exceeds the cost of processing the application. It would also abolish such fees altogether for looked-after children until they reach the age of 21 (or 25 if in full-time education), and would require the Government to produce a report setting out the effect of such fees on children’s human rights. I voted in favour of this new cause but it was defeated: Ayes-237 and Noes-323

New Clause 50 would make it is offence to advertise by any means, including using social media, services designed to facilitate the commission of an offence under section 25 of the Immigration Act 1971. A person guilty of an offence under this section shall be liable— (a) on conviction on indictment, to imprisonment for a term not exceeding 5 years, to a fine or to both, or (b) on summary conviction, to imprisonment for a term not exceeding six months, to a fine not exceeding the statutory maximum or to both. I voted for Clause 50 to tackle illegal smuggling. This was defeated : Ayes-235 and Noes-314.

Clause 52 – a fee waiver for non-UK service personnel. This would mean that the Secretary of State must, within six months of the date of Royal Assent to this Act, make regulations exempting relevant persons from the payment of fees in respect of the exercise of functions in connection with immigration or nationality under section 68 of the Immigration Act 2014.(2) For the purposes of this section, ‘relevant persons’ are persons who— (a) do not hold British citizenship and are serving or have in the past served in the UK armed forces for a minimum period of five years; or (b) are dependants of persons identified in paragraph (a).  This was lost: Ayes-251 and Noes-296.

An amendment was tabled to Clause 39 that relates to the illegal entry and similar offences. This would involve the criminalisation of the arrival and entry of asylum seekers and refugees with an offence subject to up to four years imprisonment. This amendment would have prevented this but the vote was lost.:  Ayes-233 and Noes-318.

Schedule 6 on maritime enforcement: The amendment would ensure that the powers set out in this Part of this Schedule must not be used in a manner or in circumstances that could endanger life at sea. This would give effect to the recommendation of the Joint Committee on Human Rights to ensure the maritime enforcement powers cannot be used in a manner that would endanger lives at sea. The vote was lost:  Ayes-235 and Noes-313.

On 8 December the debate on the Bill continued with New Clause 3 relating to the Offence of human trafficking for sexual exploitation. However this was lost: Ayes-236 and Noes-288.

New Clause 6 related to the exemption for child victims of modern slavery, exploitation or trafficking:

(1) The Secretary of State may not serve a slavery or trafficking information notice on a person in respect of an incident or incidents which occurred when the person was aged under 18 years.

(2) Section 61 of this Act does not apply in cases where either of the positive reasonable grounds decisions related to an incident or incidents which occurred when the person was aged under 18 years.

(3) Section 62 of this Act does not apply in cases where the positive reasonable grounds decision related to an incident or incidents which occurred when the person was aged under 18 years.

(4) Sections 64(3) and 64(6) of this Act do not apply in cases where the positive conclusive grounds decision related to an incident or incidents which occurred when the person was aged under 18 years.

An amendment to Clause 58 was considered, regarding the late compliance with slavery or trafficking information notice: damage to credibility.  I voted in favour of the amendment: This was lost:  Ayes-231 and Noes-300.

The last vote was to give the Bill a Third Reading. I voted against this. This Bill would deprive people of their rights. It does not tackle the issue of criminal smugglers or traffickers and does not offer a solution to the issues raised on the amendments. The Bill was carried:  Ayes-291 and Noes-231