HomeNewsOpposition Day Debate on Investigation into the Lobbying of Government

Opposition Day Debate on Investigation into the Lobbying of Government 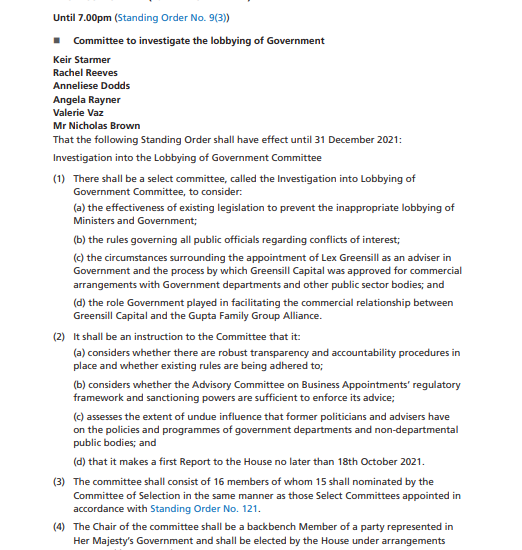 On Wednesday 14 April 2021, HM Opposition tabled an Opposition Day motion to establish a full, transparent, Parliament-run inquiry into the Greensill lobbying scandal. This must be far more transparent and open than the Boardman investigation announced by the Government earlier this week.

Hundreds of millions of pounds of public money were put at risk when Greensill was given access to Covid loan schemes, and thousands of jobs are at risk now the company has collapsed. Those workers, and British taxpayers, deserve answers.

Those caught up in the Greensill scandal – including the Chancellor, Health Secretary and former Prime Minister David Cameron – should come before Parliament to provide full transparency and publish key evidence.

The Government voted against this motion and it was defeated by Ayes: 262 – Noes: 356.