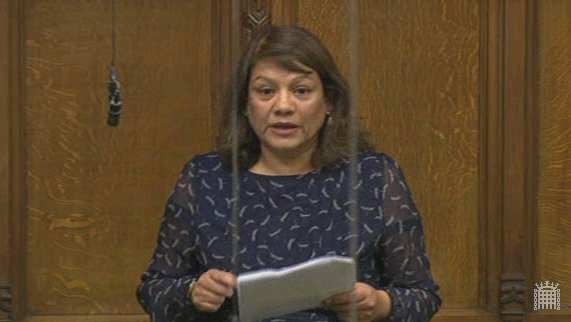 Speaking in the House of Commons, Valerie Vaz MP said:

“This debate takes place against a background of confusion and contradiction in the NHS. I hope that we will not end up with a national health disservice. We read all the documents and hear all the announcements about efficiency savings, but we still have not heard the lesson that people and patients should be at the heart of the NHS.”

“The Chancellor announced in the spending review in July that the £3.8 billion that has been allocated to the Integration Transformation Fund—aka the Better Care Fund—will only be available in 2015-16. However, the problem needs to be addressed now. That £3.8 billion is not extra money, but money that has been underspent in the NHS over the past few years. The underspend was £2.2 billion in 2013 and £1.4 billion in the previous year.”

“Many Members will know from their own hospitals that patients are suffering from delayed discharge. I have seen that first hand at Manor hospital after the closure of the accident and emergency department at Stafford hospital, where perhaps the relationship with local government is not at the same stage as it is with the local authority in Walsall, for example, and it takes longer to discharge patients. We are still waiting for the £14 million that is needed because we have had to take the strain of the closure at Stafford hospital.”

“When giving evidence, Sir Bruce Keogh, the NHS medical director, acknowledged that 20% to 25% of people in hospital should have been discharged. The Secretary of State said that himself, having spoken to chief executives of hospitals with approximately two wards full of people who could be discharged. NHS England have not “dissected out” why people are in hospital when they do not need to be there. They are working on it now—that serious work on delayed discharges has apparently only just started, despite there being a problem for some time.”

“Chaos, confusion, contradiction, and finally, from the Secretary of State an admission. In evidence last December he said that hospitals want to employ another 4,000 nurses compared with a year ago—an admission that 4,000 nurses have gone missing on his watch. We have in the staff, patients and people of this country a group of citizens who want to save their NHS.”

Link to track the progress of The Manor Hospital A&E against the national average:
http://www.bbc.co.uk/news/health-25055444