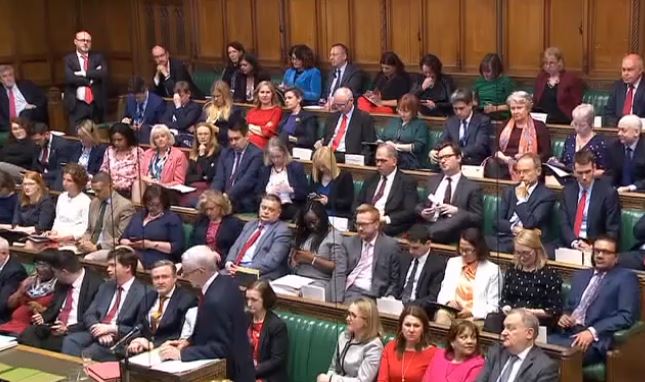 HM Opposition Labour Party tabled the following Opposition Day motion on 1 May 2019 calling on Parliament to declare an environment and climate emergency:

‘That this House declares an environment and climate emergency following the finding
of the Inter-governmental Panel on Climate Change that to avoid a more than 1.5°C rise
in global warming, global emissions would need to fall by around 45 per cent from 2010
levels by 2030, reaching net zero by around 2050; recognises the devastating impact that
volatile and extreme weather will have on UK food production, water availability, public
health and through flooding and wildfire damage; notes that the UK is currently missing
almost all of its biodiversity targets, with an alarming trend in species decline, and that
cuts of 50 per cent to the funding of Natural England are counterproductive to tackling
those problems; calls on the Government to increase the ambition of the UK’s climate
change targets under the Climate Change Act 2008 to achieve net zero emissions before
2050, to increase support for and set ambitious, short-term targets for the roll-out of
renewable and low carbon energy and transport, and to move swiftly to capture economic
opportunities and green jobs in the low carbon economy while managing risks for workers
and communities currently reliant on carbon intensive sectors; and further calls on the
Government to lay before the House within the next six months urgent proposals to
restore the UK’s natural environment and to deliver a circular, zero waste economy.’

The Leader of the Opposition, Jeremy Corbyn MP opened the debate and noted that current trajectories would put the world on course to reach net-zero emissions by the end of the century. He said: “This is no longer about a distant future, we’re talking about nothing less than the irreversible destruction of the environment within our lifetimes.”

This historic motion passed without a vote, making Parliament the first in the world to declare an environment and climate emergency.

Parliaments and Governments around the world should follow our lead and officially recognise the urgency needed to combat the climate crisis.