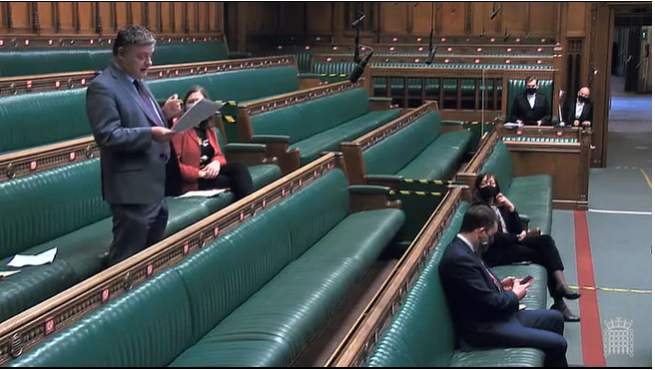 On Friday 12 March 2021 the House of Commons considered 8 Private Members’ Bills, 7 of which passed. Private Members’ Bills are introduced by individual MPs or members of the Lords rather than by the Government. As with other Public Bills their purpose is to change the law as it applies to the general population. In my capacity as Shadow Leader of the House, I was present in the Chamber when these Bills were debated. You can read about these Bills below:

This Bill was introduced by my colleague Mike Amesbury MP and seeks to reduce the cost of school uniforms by placing guidance to schools about school uniform policies on a statutory footing. According to research by the Children’s Society, families are spending an average of £337 per year on uniform for each child at secondary school, while parents of primary school children spent £315. Many low income families cannot afford these costs and this Bill aims to make uniforms more affordable.

I discussed aspects of this bill with Mike Amesbury MP on behalf of an independent school uniform retailer in my constituency who had some concerns about aspects of the Bill. These concerns were acknowledged during the Bill’s Second Reading and helped to inform the debate. On Friday 12 March 2021, the Bill passed its Third Reading and will now be considered in the House of Lords.

The second Private Members’ Bill considered on Friday 12 March 2021 aims to increase the types of funding available to the British Library. Bim Afolami MP, who introduced the Bill, has said it will give the British Library greater freedom to increase public access to its resources and to provide new services. The Bill passed its Third Reading and will go to the House of Lords for further consideration.

The purpose of the Botulinum Toxin and Cosmetic Fillers (Children) Bill is to prohibit specific cosmetic procedures being performed for purely aesthetic purposes on young people under the age of 18 years old in England. In cosmetic procedures, Botulinum toxin is used to reduce the appearance of wrinkles, whilst dermal fillers are used to fill out wrinkles and creases in the skin or increase the volume and definition of the lips and cheeks. Currently there are no statutory provisions restricting access to these procedures for children and young people. The Bill successfully passed its Third Reading and will now go to the House of Lords.

HM Prisons and Probation Service (HMPPS) in its Prisons Drugs Strategy, April 2019, described the misuse of drugs in prison as “one of the biggest challenges facing our criminal justice system today”. The Bill seeks to address these issues. It would amend the provision that allows for mandatory drug testing in prisons so that it uses the generic definition of a psychoactive substance from the Psychoactive Substances Act 2016, thereby removing the need for repeated changes to the law for newly identified substances to be individually added. It would also create powers for testing of prisoners for prescription only and pharmacy medicines and set out a statutory framework for prevalence testing. The Bill passed its Third Reading.

I have been contacted by a number of my constituents who support this Bill. It seeks to increase the maximum penalty under the Animal Welfare Act 2006 for the most serious animal cruelty offences in England and Wales from six months to five years. The maximum penalty under the Act is currently a six-month sentence and/or an unlimited fine. The Bill passed its Third Reading.

However there was no time for the following bill:

Registers of Births and Deaths Bill

The Government should announce further sitting Fridays as lockdown eases.