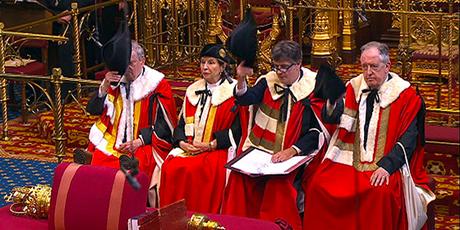 The Prorogation of Parliament took place today on Wednesday 14 May 2014.

“The Parliamentary Session 2013-14 has ended today. This means that any bills which have not completed the legislative process will be carried over to the next session. There can be no select committee inquiries or select committee reports published until the next session. You can read an article by Richard Cooke from Parliament’s Journal Office.”

“On Wednesday 14 May, the 2013-14 Session ended with Prorogation, the ceremony which marks the termination of each Session of Parliament.”

“At Prorogation all proceedings must cease: early day motions and questions which have not been answered cannot progress any further. Proceedings on private and hybrid bills are usually suspended so that they may continue in the new Session. Standing Orders provide for the House to decide that certain public Bills may be carried over into the new Session.”

“After Prorogation select committees cannot hold formal meetings until the new Session begins, so during that interval they cannot take formal evidence or agree reports. The date of Prorogation is not announced until almost the last minute, as the Government’s business managers want to ensure that they have completed any ‘ping-pong’ exchanges between the Houses on Bills which are not being carried over.”

“It is more than 150 years since the Sovereign prorogued Parliament in person. In her absence, the Queen is represented by Commissioners appointed by letters patent: on this occasion, the Lord Speaker and three other Privy Counsellors in the House of Lords.”

“As at State Opening, the ceremony involves Black Rod summoning the House of Commons to stand at the Bar of the House of Lords. The Reading Clerk first reads aloud the Commission appointing the Commissioners. Next the Clerk of the Parliaments signifies the Royal Assent, by tradition in Norman French (‘La Reyne le veult’) to each of the last few Acts passed by both Houses. A Commissioner then reads the Queen’s Speech reviewing the achievements of the Session just ended and finally, on the Queen’s behalf, prorogues Parliament in accordance with the Royal Commission. The House of Commons then returns to its Chamber, where the Speaker announces that Parliament is prorogued.” Richard Cooke.