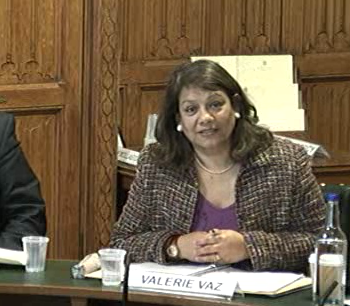 The accountability hearing with Public Health England (PHE) was held on Tuesday 19 November 2013 by the Health Select Committee, of which Valerie is a member.
Valerie said:
“The Committee raised the issue of Public Health England’s assessment of the potential health impact of fracking, the process of drilling to recover gas and oil from shale rock, following publication of a report that there were no health issues from fracking. I asked if the report was peer reviewed and was told that it was looked at by other scientists at PHE which is not a peer review.”
“I said that 75% of the chemicals used in fracking are toxic and asked whether, as public health officials, they thought this is acceptable. I was told that this was a question that could not be answered with a yes or a no. I also asked given that 25% of the chemicals used in fracking are carcinogenic whether this was acceptable. PHE said that if there is any risk of exposure, that would be unacceptable.”
“I raised the issue of health checks. It was explained that the health check programme is a population-based risk awareness, risk assessment and risk management programme that is offered to individuals in the population aged 40 to 74 years once every five years, with the intention of identifying the early risk factors for cardiovascular disease, kidney disease and stroke. It was added that more recently a component was added to increase awareness around dementia.”
“I then asked why health checks were useful given that these can be done by GPs. I have concerns that the health checks can be undertaken by any health professional and payment is made for each one. PHE said they can be done by a Dentist, health professional or a pharmacist. In my view this is not a useful exercise or use of additional public money.”
“I asked whether screening for dementia was a good idea given the report by Professor Carol Brayne, director of the Cambridge Institute of Public Health, indicating that it is not helpful or even worthwhile. PHE replied that screening for dementia is not part of the health check programme. It was clarified that the opportunity is taken to speak to people who are aged 60 to 74 and raise awareness of some of the signs and symptoms. I am concerned about whether checking for signs of dementia with a chat is the best use of public money and whether it may raise concerns.”
“The Committee raised the issue of Public Health Observatories, which were set up to produce information, data and intelligence on people’s health and health care for practitioners, commissioners, policy makers and the wider community, and whether their capacity has been reduced under this Government. There was concern expressed about the availability of the information, all had websites, and he said that PHE are creating a website.”
“The Committee raised the issue of directors of public health who work with councils. In response to my question on how many of the posts had been filled I was told that 79% were permanent.”