HomeNewsEvent to celebrate a record number of BAME MPs

Event to celebrate a record number of BAME MPs 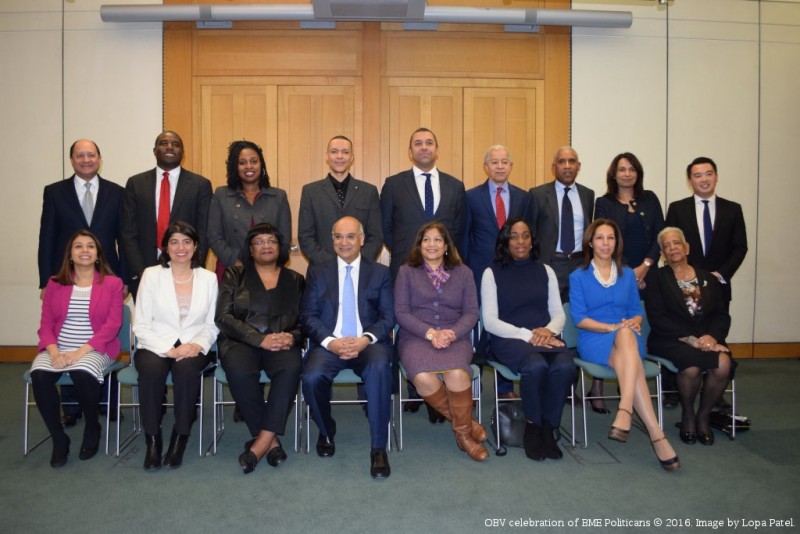 On 13th January 2016 I attended a reception to celebrate the historic number of Black and Minority Ethnic (BME) MPs. The event was hosted by Operation Black Vote, an organisation which formed in 1996 when there were only 5 MPs were BME. The current number of BME MPs is 41, which is still just 6.3% of all MPs despite Britain’s population being 12.9% Black & Minority Ethnic. BME councillors present 4.1% and BME Lords are at 5.3%.

OBV is an organisation that fights for greater racial and social justice in the UK; the evening was hosted by OBV’s Director Simon Woolley, with guest speakers including: Home Secretary Rt. Hon Theresa May MP and Chair of Home Affair’s select committee Rt. Hon Keith Vaz MP.

Simon Woolley said: “today we celebrate a record number of Black and Minority Ethnic MP’s in parliament – 41. British politics and British society greatly benefits when we can utilise diversity’s teaming talent pool. That’s why today we are announcing that in the months ahead we will begin a new MP and business shadowing scheme.

I was delighted that OBV wanted to celebrate this achievement. It has taken me over 20 years to finally get selected as an MP. My constituents in Walsall South gave me the great honour of returning me to Parliament in the 2015 election with an increased majority. OBV has played a great part in encouraging people to register to vote and to vote and to encourage BAME candidates. Simon Woolley is indefatigable in his attempt to increase the awareness of all communities which ever party they support to register and to vote in all the elections. I will continue to support OBV.