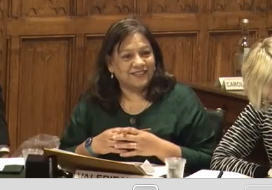 Valerie Vaz: Secretary of State, thank you for being so flexible with the Committee to allow for the votes. Earlier, my colleague asked you a question about Sir Paul Nurse, and my question is about Sir Paul Nurse’s review. We heard from him during one of our Committee sessions. Have you had a chance to consider his report, and when will you be able to make a decision on some of the recommendations he made?

Sajid Javid: Let me first take this opportunity to thank Sir Paul Nurse and put on record the excellent work he has done over a considerable amount of time, working with many others. In general, I am very happy with the work he has produced, from what I have seen, and I have discussed it with him. In terms of taking it forward, we have already said that almost all of his recommendations seem like the right ones. His key recommendation around Research UK and putting the research councils together sounds very sensible, but in terms of a full response and what we finally do, we are not yet at that stage. I wanted to allow stakeholders to respond, and we publicly said that as part of our consultation process on the HE Green Paper people should also take the opportunity to respond to Sir Paul Nurse’s review. That closed last week, and we are now in the process of going through it, but we will soon come out with our final conclusions on it.

Valerie Vaz: Could I press you on two things? First, you said “almost all”. Is there something specific you have in mind?

Sajid Javid: No, not really. It is just that before saying “all” we should listen to stakeholders and the feedback process.

Valerie Vaz: Do you have a timeframe for when you are likely to respond?

Valerie Vaz: You wrote in your letter—colleagues have touched on it—that Innovate UK would come into Research UK. You said that Innovate UK would launch market research in the new year to try to find the kind of things they are going to fund and do. Do you think that sort of set-up fits with pure research where the majority of researchers do not know where they are going? They ask questions and they want funding for that. Most pure researchers would not be able to marry the two; it is not necessarily about what the outcome is. Sometimes when you do research you do not know what the outcome is. Do you think those two strands sitting together under Research UK will fit properly, or will they have two separate forms of governance?

Sajid Javid: I envisage its being separate governance. You will have the overall organisation and some verticals within that, but I think the reason for having an overall or head organisation is to encourage more collaboration between the research that has been done by the research councils and Innovate UK. It goes back to my opening remarks about the importance of boosting productivity. Why are the Government spending all this money—taxpayers’ money? We have to be hugely responsible about every pound we spend. Why are we spending billions on research? One of the reasons has to be that, where there has been excellent research and there is a possibility of commercialising it, we should find better ways to do that. I think that having Innovate UK in the same structure has to encourage more collaboration.

Valerie Vaz: But, as you say, they will be separate.

Sajid Javid: That is how I see it. Yes.

Valerie Vaz: One of Sir Paul Nurse’s recommendations was a ministerial committee. Do you envisage that a BIS Minister will sit on that, or a Minister from another Department, or no Minister at all?

Sajid Javid: Clearly, if it is a ministerial committee it will have some Ministers on it.

Valerie Vaz: You could have a delegated Minister: for example, a director general.

Sajid Javid: True. That was an interesting recommendation. I can see where it comes from in terms of having more cross-Government co‑ordination on the issue. That co‑ordination is important because, as the Committee will know well—it is not that well known outside Parliament—many different Departments work on research. Many of the hundreds of millions of funding that research councils get come from outside BIS. As to whether we have this ministerial committee in exactly the way Sir Paul Nurse suggested, we have yet to make a decision. There are perhaps other options to achieve the same objectives without its being precisely a ministerial committee. The general point he was making about more co‑ordination was a good one, but we still need to look carefully at how we finally achieve that.

Valerie Vaz: One example I gave was whether a Minister, for example, would agree money for a large hadron collider? Would they say it was too expensive, and would they rather go for, say, graphene? I know the Government put a lot of money into graphene because you can see the end results, but I am sure you will accept that in science there is tension. Sometimes you need to do pure research and you do not even know what the end result is. It may not be something you can put a figure on.

Sajid Javid: That takes us back to an earlier point about the Haldane principle. Whether it is that committee or another, I do not envisage its being the one that makes the decisions on what research is actually done by scientists, researchers and others supporting them. The Government’s role overall, whether or not you have the committee, does not change; it is to set overall strategic directions and budgets, and to make sure that the research actually done and how the funds are utilised is based on scientific excellence.

Valerie Vaz: Do you see that committee as a way to try to increase diversity in science? Would you suggest that Research UK would look at, for example, getting more women into science and making sure they have a fair crack of the whip in terms of a scientific career, because I think we are falling behind the rest of the world in that respect?

Sajid Javid: A committee like that could certainly play a role, but I would not want to say that is the only way to do it or that, if the committee was given that objective, we should not work on alternatives. I give an example. In my previous role as Secretary of State for Culture, one of the reasons I was determined to appoint Dame Mary Archer as chairman of the national Science Museum was not only that I thought she was eminently qualified for it but that having a woman leading what I think is the best science museum in the world would help to inspire young women around the country to think of a career in science themselves, and show them that they could reach the very top. There are other ways, but you make a good suggestion too.