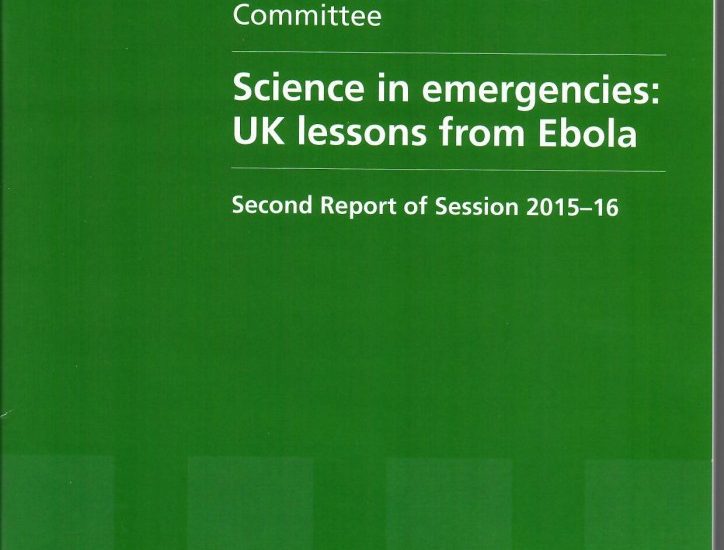 The 2nd report from the Science and Technology Committee is now available to read here: http://www.publications.parliament.uk/pa/cm201516/cmselect/cmsctech/469/46902.htm

We examined the UK’s response to Ebola focusing particularly on the mobilisation of treatment, research, scientific advice and of expertise in tackling this type of overseas disease emergency.

On the 20 July 2015, we announced our inquiry and sought written submissions addressing the following points:

a) How prepared is the Government for a similar type of emergency? Is it effectively mitigating and increasing resilience to the disease hazards identified in the National Risk Register?

b) What lessons were, or should have been, drawn from the Ebola emergency for gathering, assessing, using and communicating scientific advice across Government during this type of emergency?

c) How successful was the Government in communicating advice to the UK public about the emergency?

d) Since the Ebola emergency, how well has scientific advice been used to inform or revise the Government’s planned response to similar emergencies in future?

e) Could the evidence base and sources of scientific advice to Government on emergency mitigation, planning and response be improved? If so, how?

f) What are the strengths and weaknesses in the system for weighting the risk of a future Ebola-type emergency, including the possible scale of impacts for the UK and their likelihood?

While our report is focused on how the UK can improve its response to ‘disease emergencies’, our recommendations do not suggest that the UK’s longstanding efforts to reduce the global burden of chronic and endemic diseases should be accorded a lower priority.

Here are some of our recommendations:

– that the Government sets out, in its response to this report, how surveillance data is escalated, both within Public Health England and across Government, and identify the triggers that would prompt warnings to reach ministers and senior officials with the capacity to act.

– that the Government works with leading experts to publish an ‘emerging infectious disease strategy’.

– that the Government commissions the UK Vaccine Research and Development Network to identify the actions required to address the UK’s deficiency in manufacturing capacity and investigate the public health, economic and regulatory feasibility of establishing investigational stockpiles of vaccines that would be ready for Phase 2 trials during an outbreak.