The Great Christmas Fayre at St. Margaret’s Church in Great Barr was all set for Saturday 27 November 2021. Then the weather took a turn and snow fell making everything look glorious but some stallholders found it difficult to bring their stalls to St Margaret’ Church. So a message was sent out that the Christmas Fayre was going to be cancelled. However some turned up and there was tea and cake. It was good to catch up with the vicar the Reverend Prebendary Martin Rutter and those who look after the Church. I managed to buy some Christmas Fayre that was on offer at a stall.

Not to waste the day Charlie Hatfield showed me the Belfry and gave me a quick lesson on how to ring the church bells. I managed to pull the treble bell. The new bells of St Margaret’s were first rung 25 July 1796 at the Barr Wake celebrations. They were cast by Edward Arnold of Leicester. The bells are rung by a volunteer group for the 11am and 6:30pm services on Sundays. You can find out more about the bell ringing here. 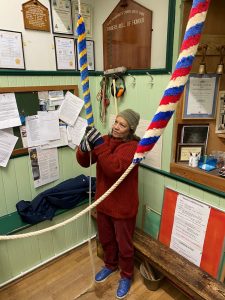