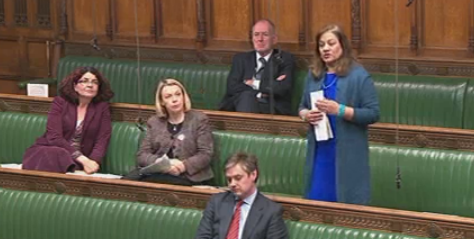 During the Government’s Response to Mid Staffs NHS Foundation Trust Public Inquiry on Tuesday 26 March 2013, Valerie asked the Secretary of State for Health how the new Chief Inspector of Hospitals would fit in to the current arrangements fo the regulators.

Valerie asked:
“I thank the Secretary of State for his statement, and we welcome the continuation of this discussion at the Health Committee. One of the recommendations of Francis was for the Secretary of State to look at the overlap between the CQC and Monitor, both of which were involved and have accepted they were part of the failings. Under the new inspection regime, will the chief inspector report to the Secretary of State or to the NHS Commissioning Board?”
The Secretary of State replied:
“Neither. The chief inspector will report to the CQC. The hon. Lady is right that one of the problems is the overlapping roles and the confusion of roles. What we are announcing today is a significant change in the responsibilities of the CQC. It will no longer be involved in putting right problems in hospitals: its job will simply be to identify problems, so it is not compromised in its ability to be the nation’s whistleblower-in-chief. The responsibility for putting right problems will lie with Monitor, the NHS Trust Development Authority, the NHS Commissioning Board and the wider NHS system. We want to make sure that the chief inspector is unconstrained and unconflicted, when his or her team goes into hospitals, from shouting loudly if there is a problem and continuing to shout loudly until it is solved.”
The transcript in the Official Record can be found here: http://www.publications.parliament.uk/pa/cm201213/cmhansrd/cm130326/debtext/130326-0001.htm#13032655001477
The Report of the Mid Staff NHS Foundation Trust Public Inquiry can be found here: http://www.midstaffspublicinquiry.com/report