The Magna Carta and Parliament 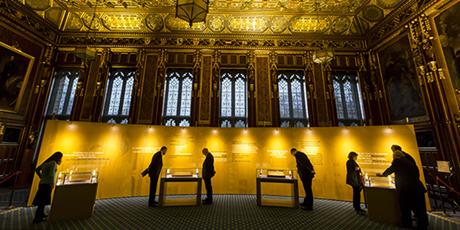 As part of the celebrations for the 800 anniversary of the signing of the Magna Carta, on Thursday 5 February 2015 Valerie viewed the four remaining copies of the 1215 Magna Carta originals in Parliament.
Valerie said:
“It was a privilege to view all four of the surviving 1215 Magna Carta originals in Parliament. These were the documents that established the principle of the rule of law in the UK 800 years ago, and this has been adopted around the world. The Magna Carta led to the Montfort parliament of 1265 and marked the beginning of modern rights and representation, and the democracy we have today.”
“The four copies of the 1215 Magna Carta manuscripts were loaned to Parliament for one day by the organisations that hold and display them on a permanent basis – two from the British Library, one from Salisbury Cathedral and one from Lincoln Cathedral. They will be displayed in the British Library in June.”
More information about the Magna Carta can be found here: http://www.parliament.uk/about/living-heritage/evolutionofparliament/2015-parliament-in-the-making/2015-historic-anniversaries/magna-carta/