HomeNewsUrgent Question on the postponement of Standardising Tobacco Packaging

Urgent Question on the postponement of Standardising Tobacco Packaging 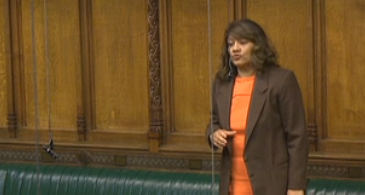 On Friday 12 July 2013 the Opposition was granted an Urgent Question following the Government’s decision to postpone legislation that would force the removal of branding from tobacco packaging.
In the Commons Valerie Vaz asked the Minister:
“Apart from vending machines, what public health initiatives is the Minister going to undertake immediately to stop 570 children a day taking up smoking?”
The Parliamentary Under-Secretary of State for Health:
“We have a number of measures. For example, we have some of the toughest tax and duty measures in relation to tobacco. The “Stoptober” campaign was phenomenally successful last year. We have a TV campaign that is encouraging people not to smoke in cars, for example, as well as our other continuing work. With public health being devolved back to where it always should have been—to local authorities—a number of authorities, notably up in north-east England, have taken grave measures to tackle smoking by educating young people, in particular. This is all good work that will continue through Public Health England.”

Valerie said: The Government has no credible public health policy. Cancer Research UK said they are bitterly disappointed by the Government’s announcement that it has delayed a decision on standardised tobacco packaging. 33 of my constituents replied to the consultation through Cancer Research UK. The also said that 949 children start smoking every year in Walsall1. I am appalled at these figures. People who smoke start when they are young. I dont know what the Government are waiting for. According to a YouGov poll, 63 % are in favour of plain packaging and 16% against. That is an endosement for plain packaging.