HomeNewsValerie is granted an Urgent Question on Burma

Valerie is granted an Urgent Question on Burma 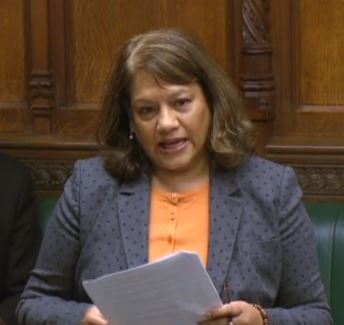 On Thursday 4 November 2015 I applied to Mr Speaker Berco for an Urgent Question in the House of Commons about the upcoming elections in Burma which Mr Speaker granted.

“To ask the Secretary of State for Foreign and Commonwealth Affairs if he will make a statement on the release of political activists and human rights ahead of the elections in Burma on 8 November.”

“The Assistance Association for Political Prisoners, a Thailand-based advocacy group, believes that there are many political prisoners and that more than 450 other people are awaiting trial. It says that the Burmese Government’s actions have intensified ahead of the polls, with the authorities continuing to lock up activists in the months leading up to the election. It stated: “It is a great opportunity for the government to release all remaining political prisoners ahead of the election so that these people can participate in the historic polls… If the government really wants to move forward to democracy, no political prisoner should be behind bars.””

“Father Thomas Htang Shan Mong, the director of the bishops conference’s justice and peace commission, has said that locking up activists contravenes basic social justice principles. He stated: “Scores of political prisoners remain behind bars”. He went on to say that “the country has yet to move forward to democracy” and that “civil society groups…need to push for amending the draconian laws that attempt to silence activists.”

The Minister helpfully mentioned the case of Patrick Kum Jaa Lee who was arrested because he shared a photograph of a man wearing a Kachin-style longyi and stepping on a portrait of Commander-in-Chief Senior-General Min Aung Hlaing. A woman was detained after she shared a satirical picture on social media, comparing Burmese army uniforms to a feminine longyi used by opposition leader Aung San Suu Kyi. Will the Minister say whether, ahead of these apparent free and fair elections, all activists awaiting trial and political prisoners are still in prison? He mentioned 96 prisoners, but perhaps he could update the House with another figure.”

“Large parts of Christian-majority Kachin state effectively remain in a state of civil war. More than 100,000 people have been displaced as a result of clashes, and they remain in temporary camps in Kachin and Shan states. The conflict shows that the Government have failed to deliver on their promise to end armed clashes in Myanmar before the vote on 8 November. In fact, only eight of 15 groups who participated in the national peace process were involved in the 15 October agreement. A Yangon-based political analyst said the fact that only some of the country’s armed ethnic groups have signed the agreement shows that it is more of a “cosmetic political show” than a historic benchmark, and stated: “The peace process must be inclusive of all ethnic armed groups and the Government has not allowed some ethnic groups to be involved in the cease-fire agreement.””

“Will the Minister update the House on whether the ceasefire agreement included all the ethnic groups, and will he say whether it is still in place ahead of the supposed free and fair elections on 8 November?”

“The United Nations special rapporteur on human rights in Burma said that the restrictions on rights to freedom of expression, assembly and association—including arrests and excessive force against protesters—put genuine elections at risk. Yanghee Lee said that there were worrying trends of undermining the democratic space, and a clear need for continued legislative and constitutional reform to bring the country’s legal framework in line with international human rights laws and standards. Given this country’s incredible investment in Burma, that is a matter of public policy. On Tuesday, Ben Rogers and Mark Farmaner updated us with their concerns about what is happening during the election, ahead of your historic round-table discussion in Speaker’s House, Mr Speaker.”

“Will the Minister ensure that he supports the United Nation’s call for all actors to work together to support further reforms in Burma? Given that a third of the population are from an ethnic minority background, internally displaced people and disenfranchised Rohingya people must all be part of that peace process to build a new nation that will encompass everyone after 8 November. Finally, will the Minister report back on this issue to the House?”

The Minister gave a helpful response and I was pleased that he unequivocally condemned the holding of political prisoners in the run up to the election.

You can read the full Hansard transcript of my question, my speech and the debate here.

Later I attended and spoke at a rally by the Rohingya diaspora outside the Foreign and Commonwealth Office which was also attended by Baroness Kinnock.

I am a signatory to a letter signed by MPs, Peers and MEPS on the elections in Burma. The full text of the letter can be found here: http://www.freefairelectionburma.com/