HomeNewsValerie asks Urgent Question on the situation in Burma

Valerie asks Urgent Question on the situation in Burma 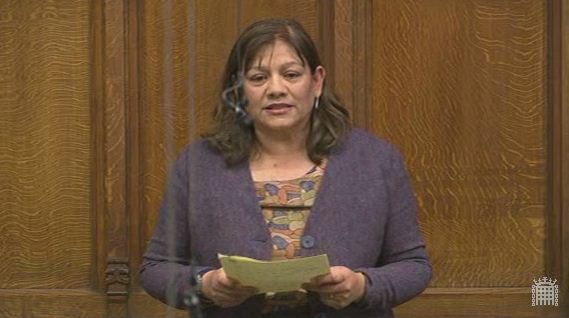 On 14 January 2013, Valerie was granted an Urgent Question on Burmese army attacks on civilians in the Kachin state, where a 15 year old boy and a pastor were killed in an attack that morning.

“As a result of civilian deaths that morning, I requested an Urgent Question, which the Speaker, the Rt Hon John Bercow MP, kindly granted on Burmese army attacks on civilians in the Kachin state. A 15 year old boy and a 76 year old pastor were among those killed over recent days along with a number of other civilians. This reflects the gravity of the situation and the need for the British Government to do what it can to address the situation.”

Speaking in the House of Commons, Valerie Vaz MP said:

“The Minister referred to the fact that today, at 8.15 am Burmese time, a 15-year-old boy and a pastor were killed by a direct hit. Will he again raise with the Burmese Government the need to stop any firing on civilians, because BBC Asia has confirmed that these attacks are unprovoked? Will he also raise with the Burmese Government the fact that humanitarian aid is not getting through to 75,000 displaced people? He talked about DFID money, but will he ensure that any British aid is getting to the people who need it most? Given that the EU has suspended sanctions, will the Minister suggest to his EU counterparts that sanctions be reinstated if such direct action on civilians does not stop?”

“Has the Minister discussed the crisis with the Chinese Government? The planes are of Chinese origin and the gunships are Russian, so will he undertake to say to both Governments that the raids must stop?”

“Given that the Kachin state reached an agreement with the Burmese Government in 2011, and that other minority groups have also formed agreements with them—that is all being put in jeopardy—will the Minister take steps to ensure that the United Nations calls all parties round the table for a proper constitutional settlement, and perhaps a second Panglong conference? Finally, will he ask the Prime Minister to put Burma on the agenda at the G8 summit, when we have the presidency, so that we can hear the voice of the peacemakers, and will he report to the House?”

“I thank the hon. Lady for her questions. I repeat again, I am sure on behalf of the whole House, our deep regret at any civilian deaths. Our determination is to seek contact with all sides and that the hostilities cease altogether, wherever they are directed. But, of course, it is particularly upsetting if civilians are involved, and we have indeed made that clear to the Burmese authorities.”

“In response to increased need, the Department for International Development announced in December 2012 an additional £1.5 million of humanitarian support for people displaced by fighting in Kachin and neighbouring states, bringing our total humanitarian aid contribution to the conflict in Kachin to £3.5 million and supporting 27,500 people to access food, shelter and clean water.”

You can read the Hansard Transcript of Valerie’s question and the Minister’s response here.