I was delighted  to celebrate the 150th anniversary of the Emirates FA Cup on Monday 1st November 2021. The event commemorated our long and rich football history. The FA Cup was first played during the 1871-72 season and is the oldest national football competition in the world.

This year  marks the 50th anniversary of the Women’s FA Cup, founded almost 100 years later in 1970. Women’s football was banned in 1921 by the FA. The independent Women’s Football Association was formed in 1969 by Patricia Gregory. The ban was later rescinded following pressure from UEFA, the governing European body for football.

David James MBE the Premier League and England goalkeeper spoke at the event. David started his career at Watford FC before going on to play for Liverpool, Portsmouth, Aston Villa, West Ham United and Manchester City. He later managed and played for the Keralan Blasters in the Indian Super League. He has won 53 caps for England. 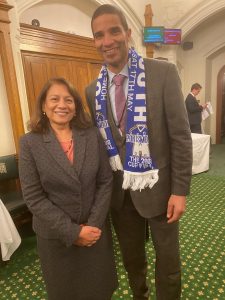 David and I talked about growing the grassroots game. Earlier this year David called on the Government to support youth and amateur football teams as they deal with the devastating impacts of the Covid-19 pandemic. He has spearheaded a national campaign to ensure local football clubs are properly subsidised. The campaign produced a report that shows the hugely positive impact that the 40,000 grassroots football clubs have on our young people and communities. You can read the report here.