The crisis of shop closures facing town centres across the country, including Walsall, is having a negative impact on both local communities and the wider UK economy. To combat this, Usdaw launched their Industrial Strategy for Retail at an event I attended in Parliament on Wednesday 5 June 2019.

As is one of the UK’s largest trade unions, Usdaw has over 420,000 members in retail, transport, warehousing, distribution and food manufacturing. Aiming to ‘Save Our Shops’, their Industrial Strategy for Retail is based on three main strands: 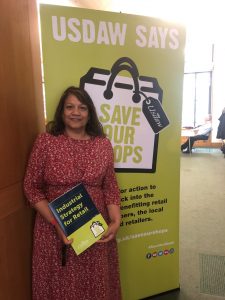 The publication of Usdaw’s Industrial Strategy for Retail aims to convince the Government to take urgent action to combat the challenges faced by the retail sector. You can find out more about Usdaw and their #SaveOurShops campaign here.