On Monday 11 March I attended ‘Tackling Plastic Pollution’, co-hosted by the APPG on the Prevention of Plastic Waste, Plastic Oceans UK and the Coalition for Global Prosperity, about the damage that single-use plastic products are doing to Earth’s ecosystems.

Sir David Attenborough was present at the event. The panel included, among others, Mary Creagh (chair of the Environmental Audit Committee), Jo Ruxton of Plastic Oceans UK and Theo Clarke of the Coalition for Global Prosperity. The panel discussed Britain’s role in tackling plastic pollution at home and in developing countries around the world.

Single-use plastic is quickly discarded but does not suddenly disappear once it is thrown away, leading to it accumulating in rivers and oceans around the world.

Plastic pollution can then cause harm to wildlife, by leaching harmful chemicals into the water or causing physical harm to animals that become trapped in the litter in or weighed down by plastic they have mistaken for food.

The organisation Plastic Oceans UK co-hosted the event and aims to educate people on how we can combat the issue of plastic pollution. They say that whilst plastic is a “miracle material” which has completely transformed the way we live, our attitude towards plastic is what causes its danger to wildlife.

Plastic Oceans offers suggestions on what everyone can do to reduce plastic pollution:

The plastic in the jars below was found in the stomach of seabirds: 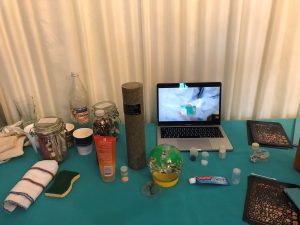 “Around 70 per cent of all the litter in the oceans is made of plastic and, if no action is taken, it will treble within the next ten years.” The risks presented by this plastic pollution include “direct entanglement or ingestion by seabirds and marine life and the suffocation of coral reefs and life on the seabed.”

The Environmental Audit Committee’s Sustainable Seas report can be read in full here.

There is also lack of data on the serious long-term harm and the health implications of these plastic particles entering the food chain. 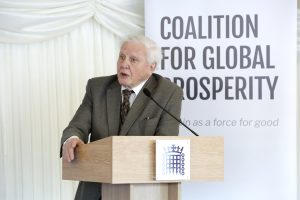 Sir David Attenborough CBE said: “Now the world globally is producing every year 400 million tonnes of plastic and 10 million tonnes of that goes into the oceans…The consequences of this both to humanity and life in the seas upon which we depend is hideous.”

The issue of plastic pollution is escalating and unavoidable; far from remaining beyond our shores, it is washing up there daily. From microplastics disrupting our fishing industry and sparking concerns about public health, to beautiful stretches of British coastline being ruined, it is essential that this issue is confronted with coordinated efforts around the world.

This event put a spotlight on the UK’s commitment to reducing plastic waste across the world, and the opportunity for Britain to be at the forefront of these global conservation efforts.