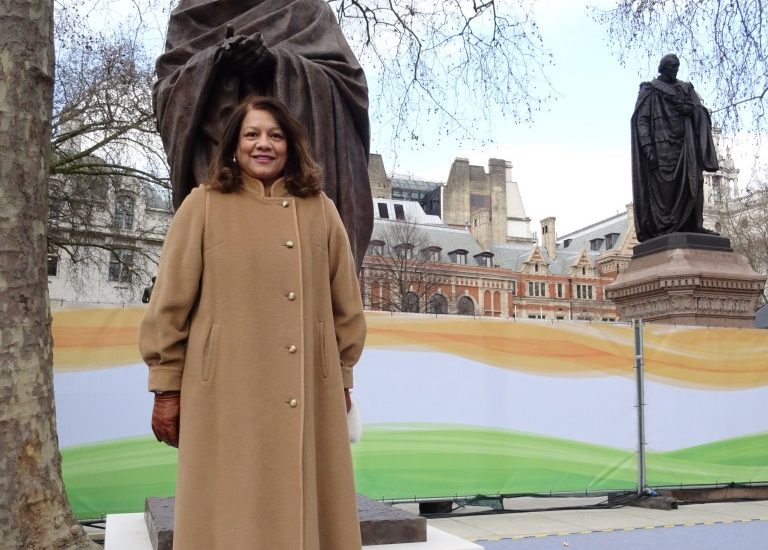 On Saturday 14 March 2015 Valerie attended the unveiling ceremony of the Mahatma Gandhi Statue in Parliament Square. The statue was the work of the sculptor, Philip Jackson.”

“It was an honour to be present at the unveiling of Mahatma Gandhi’s statue in Parliament Square. Gandhi was an impressive person who used non- violence and peaceful protest to draw attention to the oppression of India’s poorest classes and secure Independence from the British.”

The 9ft statue opposite the Houses of Parliament is a fitting tribute to mark the 100th anniversary of Gandhi’s return to India to start the process for independence from British rule. The ceremony was celebrated in the presence of Ghandi’s grandson Gopal Gandhi,the Indian finance minister Arun Jaitley and the film star Amitabh Bachchan.”

“Gopal Gandhi’s speech reminded us that there is so much unfinished. He also said that he referred to India as She “with deliberation for that ‘she’ the woman in India, worshipped in concept but neglected, exploited, abused in reality is one of the scorching truths of India.”

“It is fitting that the statue stands next to that of Nelson Mandela as Gandhi started his working life in South Africa and lessons were learned by the Anti_ Apartheid movement and Martin Luther King followed Gandhi’s non violence message. It was an inspirational day.”