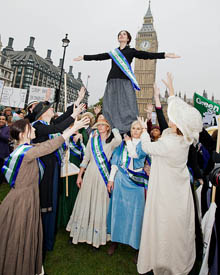 On Wednesday 24 October 2012 Valerie met with UK Feminista Lobby on Parliament Square to discuss the issue of gender equality.

“Emmeline Pankhurst led a lobby to demand the vote for women, over 100 years later her great-granddaughter led hundreds of women and men with a new set of demands. I joined the Feministas on Parliament Square to show my support for young girls and women in the UK and around the world on matters of gender equality.”

“The UK Feminista Lobby is championing a number of issues that are vitally important. Their campaigns start at school where they want to ensure that girls and boys are educated in the issues of gender equality. The Feministas also defend a woman’s right to choose against the recent attacks on abortion rights, protect women’s economic independence, take issue with the low numbers of female MPs in Parliament and deplore the objectification of women in the media.”

“I support gender equality issuesin my work in Parliament and most recently I have spoken out against FGM and the small proportion of women on FTSE100 boards.”