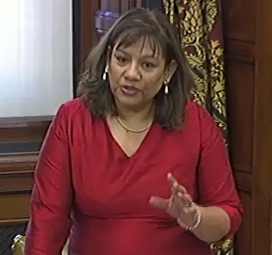 On Tuesday 7 February 2012 Valerie spoke in a Westminster Hall debate on the subject of the Government’s Alcohol Strategy.

Speaking after the debate, Valerie said:

“This was an important debate. As a member of the Health Select Committee I think that more needs to be done to deal with a problem that is getting out of hand both for society and the health and well-being of members of society.

“Alcohol abuse puts great pressure on A & E services, and other public servants including the police have to clear up the mess on Saturday evenings at a cost of £13bn.  Alcohol is linked to many other diseases, and to violent crimes, domestic violence and anti-social behaviour.

“In my view, there should not be 24-hour licensing.  Before the law was changed pubs used to close at 11pm and people knew it was time to go home.”

You can read the debate online by clicking here.