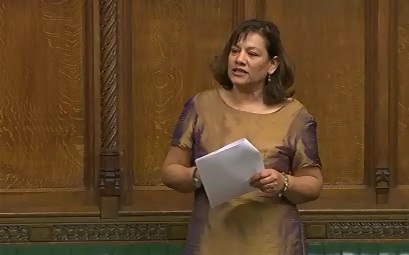 During a House of Commons debate on 1 December 2011 Valerie called for a rethink of the proposed 20% cuts to the BBC budget.

“As a West Midlands MP I am dismayed about the proposed decimation of BBC West Midlands, which has a unique 90-year history of both factual and drama programme making.  Factual programming for BBC television and Radio 4 will be moved out of Birmingham; it is estimated that 150 jobs will go – including journalists, researchers, engineers and producers. This will have a devastating effect on the local economy and cultural voice.

“Birmingham is the country’s second city and the geographical heart of England.  The West Midlands is one of the most diverse areas of the country and there is a different pool of talent from that in London.

“Outreach work is carried out across the West Midlands and includes projects such as the BBC News School Report, the International School and the University of Birmingham Sports Partnership. I am concerned that these partnerships, as well as the local news dimension and the specialist cutting edge digital production could be lost and never regained.”

“Nationally, the proposals would mean the loss of 2,000 jobs, and cuts to core news and programmes.  I am calling on the BBC to reconsider some of its short-term responses to the problem of relieving pressure on its budget.

“For just £12 a month the nation can enjoy new drama, science and current affairs programmes. Increasing the licence fee by just 7p per day could stop all these cuts.  The world is getting more complex; the BBC needs to expand and not contract.  I am urging the BBC to think again over these proposals.”

“I wrote to Lord Patten, Chair of the BBC Trust, and Mark Thompson, Director General of the BBC, asking them to rethink these damaging proposals.  Their responses have not reassured me about the plans to move factual programming from Birmingham to Bristol.  I have written a further letter to the Director General to ask what impact assessments and evaluations were undertaken while these plans were being drawn up.”

You can read the transcript of Valerie’s speech by clicking here.