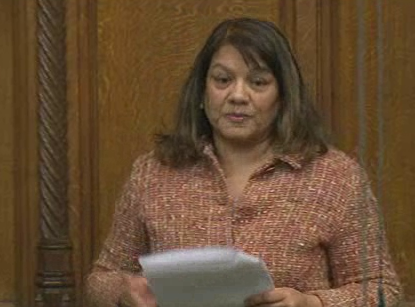 On Thursday 22 January 2015 Valerie as a member of the Governance Select Committee spoke in the debate on the report of the Select Committee.
Valerie Vaz MP said:
“The House of Commons Governance Select Committee was set up after the Speaker’s announcement to pause the process of appointing a new Clerk of the House and Chief Executive, following the retirement of the former Clerk Sir Robert Rogers in July 2014. The Committee all took the task the House gave us very seriously. We considered the governance of the House of Commons including the future allocation of the responsibilities for House services currently exercised by the Clerk of the House and Chief Executive. To achieve this the Committee met three times a week and held 17 sessions to produce this unanimous report. We did not want to go over the background to why we were there, but to find ways to move forward.”
“The Commission sets the strategic framework for the delivery of services to Members, staff and the public. We recommended the streamlining of the structures that are currently in place to better enable Members of Parliament to efficiently carry out their work and to represent their constituents. The Committee also called for a closer working between the House of Commons and the House of Lords to save money and increase efficiencies. The new structure will remove the previous confusion of lines of reporting, accountability and action. The framework proposes four elected members given the status of Select Committee Chairs, each with a specific role. These roles are Chair the Finance Committee, Chair of the Administration Committee, a lead on Restoration and Renewal of the Palace of Westminster; and a lead on Human Resources in the Houses of Parliament.”
“The Committee met with staff from all departments and all levels who were able to provide written evidence orally and anonymously. They had a variety of ideas on the running of Parliament. I hope that this practice is continued by the Commission as they look to further develop the running of Parliament. There is not another institution like Parliament. The public sector instils that unique sense of public duty and acting in the public interest that we see everyday from the people who work here.”
“The Committee decided that we should have the two separate roles. The Clerk’s role is unique and the skills required are extremely important. However, it is too much to ask one person to undertake the responsibility of the other aspects of the House relating to its management and liaison with the other place—a necessary and important requirement. The director general is autonomous and is responsible for resource allocation and delivery across the House service. The appointment process of the Clerk must be transparent and fit for the 21st Century. Ultimately, it must be the Speaker, elected by Members, but with the support and the challenge from the Commission, who is in charge.”
“Parliament is a place of work that should be accessible to those who need to understand it and who send us here—but sometimes it is not accessible. We should be able to conduct our work on behalf of our constituents in an efficient and timely manner. I thank my colleagues on the Committee for their support, and I commend the report to the House.”
The Governance of the House Committee’s Report is available to read here: http://www.publications.parliament.uk/pa/cm201415/cmselect/cmgovern/692/692.pdf
The Report was agreed by Motion on Thursday 22 January 2015.
Members of the Governance of the House Committee:
• Mr Jack Straw MP, Labour (Chair)
• Sir Oliver Heald MP, Conservative
• Mr David Heath MP, Liberal Democrat
• Jesse Norman MP, Conservative
• Ian Paisley MP, Democratic Unionist
• Jacob Rees-Mogg MP, Conservative
• Valerie Vaz MP, Labour
• Mr Dave Watts MP, Labour