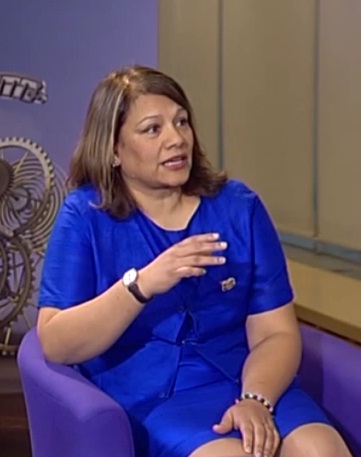 On Sunday 15 January 2012 Valerie was a guest on the first BBC Sunday Politics West Midlands in its new format.

The topics of the day were the announcement that a new high speed rail link (HS2) between London and Birmingham will go ahead, and the scourge of metal thefts, thought to cost the UK £770m per year.

“We have to think about the good of the country and there is cross-party consensus.

“I hope that the new link will bring economic benefits for the West Midlands and for Walsall.  It is important that local transport links are improved so that people in Walsall can take advantage of all the benefits of this national project.”

Valerie also congratulated the BBC on its research into the impact of metal theft across the region, saying that it represented ‘public broadcasting at its best’.  The BBC used Freedom of Information requests to gather information from regional police forces on the number of offences and value of stolen metal since 2008.

“We have seen the theft of Barabara Hepworth’s scupture, and there are ten thefts every day from churches.  The key is enforcement and I agree with some of my colleagues who have called for no cash in the system.

“In Walsall we have Operation Steel, with multi-disciplined partnerships and targeting certain areas.  We had the housing groups, the police and the council all getting together and targeting people: we need people on the ground and that is the main concern.”

Valerie also raised her concerns that the Government has not managed its legislative timetable well, and has left MPs in the House of Commons with few Bills to discuss, while the Welfare Reform Bill and Health Bill are being fiercely debated in the House of Lords.

You can view the Midlands section of the Sunday Politics Show on BBC iPlayer by clicking here.