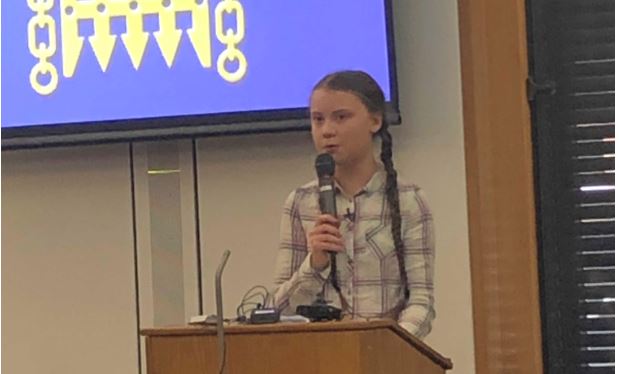 Thunberg spoke about the action which must be taken to combat climate change, and the need to act quickly and decisively to limit warming to avoid catastrophic consequences.

The rising concentration of CO2 in our atmosphere is due to the burning of fossil fuels and deforestation and has led to an increase in the greenhouse effect. This has resulted in increasing global average temperatures. Rising temperatures endanger Earth’s ecosystems – including human life – in many ways, including melting sea ice and thermal expansion causing rising sea levels, warming seas and land making areas uninhabitable to wildlife and the more frequent occurrence of extreme weather events such as flooding, tropical storms, wildfire and drought, as already demonstrated in recent years.

I have raised the work of Greta Thunberg, aged just 16, at Business Questions on a number of occasions. On 7 March 2019, I celebrated the next generation of ​young women activists, including Greta Thunberg who started a movement to combat climate change. They know that climate change and equality know no boundaries, and that such matters are not about the ego of the few, but that the compassion and co-operation of the many will change the world.

At Business Questions on 21 March 2019, I raised Greta’s own words: “you cheat when you can because all that matters is to win…We need to start co-operating and sharing the remaining resources of this planet in a fair way.”

Greta began her climate change activism by standing outside the Swedish Parliament on a school strike, an act which soon inspired many young people around the world to take part in their own school strikes and marches to demand that governments take more action on the issue of climate change.