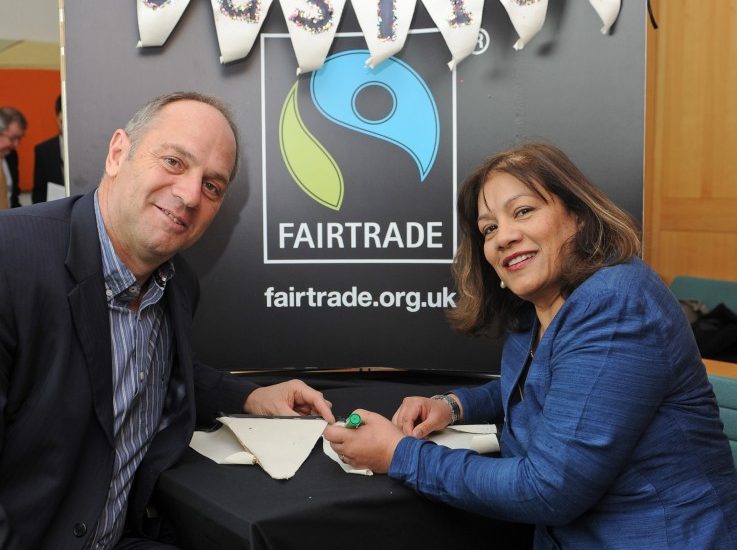 The world record attempt is to mark this year’s Fairtrade Fortnight and to highlight the Fairtrade Foundation’s ‘Great Cotton Stitch-Up’ campaign – a drive to end unfair European cotton subsidies.  West African cotton producers are some of the poorest farmers on the planet and yet, last year, had to compete with EU farmers who received over £600m in subsidies – the equivalent to Estonia’s entire EU contribution.

The record for the world’s longest bunting is currently 2,986 metres.  Fairtrade campaigners and supporters around the country are aiming to reach at least 4,350 metres – over two and a half miles!

The final bunting will be displayed on World Fairtrade Day, 14 May.

“It is scandalous that West African farmers who earn less than $1 a day cannot use their farming skills to trade their way out of poverty. From the amount of Fairtrade goods in our local shop, I know trade justice is something residents really care about; therefore I am proud to be backing Fairtrade this Fortnight and their bid to break the bunting record.

“Behind this campaign is a serious message to end unfair European cotton subsidies and to make trade fair.  That’s why I am supporting this bid, so we can help some of the poorest cotton farmers in the world make a decent living from their work.”

“I am delighted that Valerie is backing Fairtrade’s campaign.  I have visited West African cotton farmers in Mali and I have seen how hard it is to make a living from cotton already.  Farmers there are not asking for a handout, just a level playing field so they can improve their families and communities through hard work.

“Working together we can end these subsidies and make their live just a little bit easier.”

Full details of the Great Cotton Stitch Up campaign can be found here: bit.ly/dRwiBk