HomeNewsValerie meets delegates of the Senate and National Assembly of Pakistan

Valerie meets delegates of the Senate and National Assembly of Pakistan 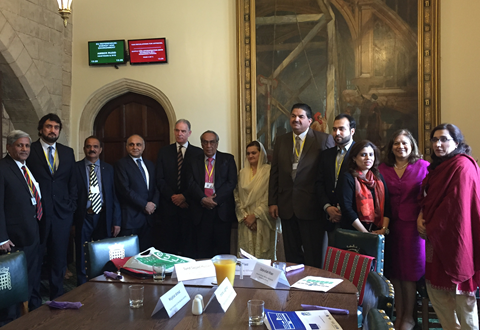 I was delighted to speak to the members of the Senate and National Assembly of Pakistan on Tuesday 12 July 2016.

The delegation had a full schedule and i was asked to speak to them about the Governance of the House Committee of which i was a member in 2014. The Committee also known as the Straw Committeee looked at all aspects of the House. I said it was important to hear what all parts of the organisation and in addition to the evidence sessions we had a round table discussion with members of staff from all levels. The Committee were tasked with trying to find a governance arrangement to reflect the modern House of Commons and felt that separating the roles of the Chief Clerk and the Chief Executive both with their own areas of responsibility was the best option. I explained that the Select Committees are staffed by independent officers and the Committee also wanted to see a more diverse and the ability of staff to keep the institutional memory but enable staff to move from the administative to the committee side to enhance their skills.

The meeting was also addressed by Mark Hutton, who was the Clerk of the House of Commons Governance Committee. I explained to the delegation that the committee was indebted to the professionalism and skills of the clerks not just for our committee but all committees. You can read the Committee’s report here: http://www.publications.parliament.uk/pa/cm201415/cmselect/cmgovern/692/69202.htm