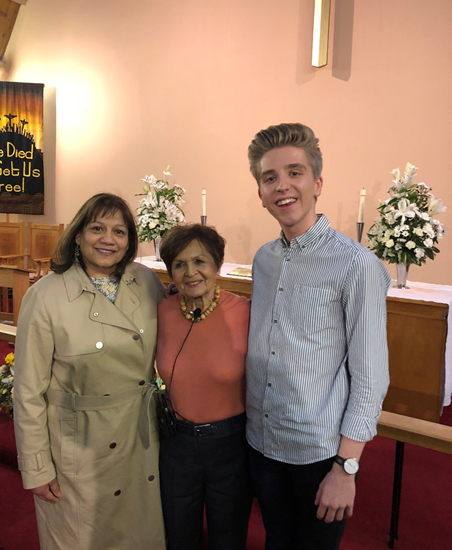 At St Martin’s Church Walsall on Saturday 7 April 2018, I heard Janine Webber’s testimony of her experience during the Holocaust.

I raised Janine’s story in the House at Business Questions on Thursday 19 April 2018.

Janine was born in Lwów in Poland in 1932. Following the Nazi-Soviet Pact, Lwów was occupied by the Red Army in 1939 and remained under Soviet rule until June 1941 when Germany invaded the USSR. Persecution of the Jews of Lwów began immediately, and thousands of people were murdered within weeks of the invasion by the Nazis and Ukrainian collaborators.

Janine and her family lived with the fear of frequent German raids. Janine’s parents dug a hiding place under a wardrobe; this was sufficient to protect Janine, her brother and her mother but there was not enough room for the other members of her family – Janine’s father was shot and she never saw her grandmother again.

Janine and her family were forced into the ghetto, where her mother fell seriously ill with typhus and died aged just 29. With other members of Janine’s extended family falling victim to disease or deportation, her uncle found a Polish farmer willing to hide Janine and her Aunt Rouja.

Janine’s uncle then found another farming family to hide her and her brother Tunio, but after a few months an SS man shot Tunio. Janine found work as a shepherdess until the Polish family she was living with learnt of her Jewish identity. Fearing for their own safety, they bought Janine a train ticket to return to Lwów.

A Polish man, Edek, the caretaker of a convent in Lwów, hid Janine in the attic of a building. She was then moved to an underground bunker, where she stayed for nearly a year. Janine obtained false papers and was then sent to a convent in Kraków, from where she was taken with three other girls to live with a priest. She finally moved to live with an elderly couple, where she worked as a maid until Kraków was liberated in early 1945.

Six months after the end of the war, her Aunt Rouja placed Janine in a children’s home, but fearing antisemitism in Poland, they decided to leave for Paris. In 1956, Janine came to the UK to improve her English, where she met and married her husband. They had two sons and two grandsons. Today, Janine still lives in London and regularly shares her testimony with schools.

You can read more about Janine’s story on the Holocaust Education Trust website: www.het.org.uk