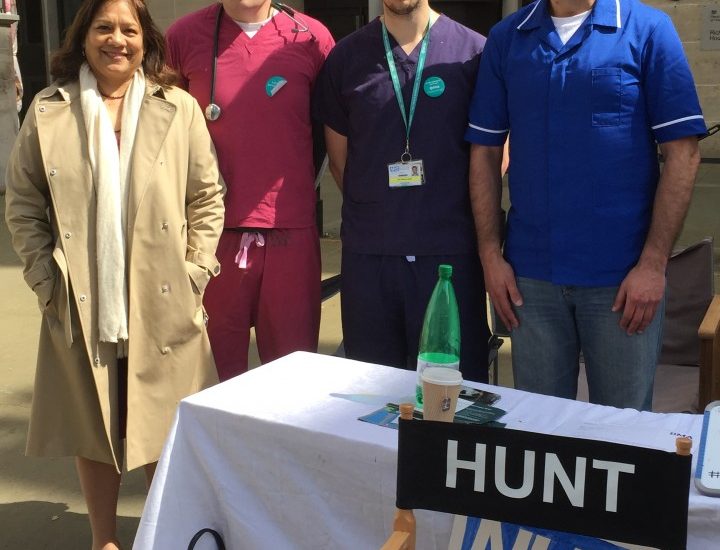 The Junior Doctors have been waiting for the Secretary of State Jeremy Hunt outside Richmond House, the Department of Health so that they can engage with him to discuss the imposition of “7” day contract. The Secretary of State has said on numerous occasion that he will “impose” the contract. The Junior doctors with the backing of the BMA have balloted the members and won support for days of action. I visited the stall and spoke to Junior doctors and a nurse. They were adamant that they do not want to undertake further action but want to discuss the remaining concerns they have about patient safety under the new contract.

Earlier at Business Questions to the Leader of the House, I called for a debate on Junior doctors contracts: Here is our exchange:

Chris Grayling: This matter was debated and discussed in the House on Monday.

Valerie Vaz :It was an urgent question.

Chris Grayling: It was, but the Secretary of State for Health was here and he did take questions, and I have no doubt that he will be back in the House to address the issue in due course. It is simply my hope that a resolution can be reached. He and his colleagues in the Department of Health have put in extensive efforts and have held something like 75 meetings with junior doctors’ representatives. None of us wants to see a strike, particularly not one that involves emergency services. I would call on all doctors not to take industrial action next week and I hope a resolution can be reached quickly.

I have tabled a written question to find out what the position is with the “imposition” of the contract. On the previous day At Business Questions I called for the suspension of the imposition of the contract following the court action which is currently pending against the Secretary of State.

My written question tabled on the 21 April 2016 is:
What a) oral b) written communication, guidance or information has there been between the Department of Health and a) NHS England b) NHS Foundation Trusts concerning the implementation of changes to junior doctor’s contracts or terms and conditions?.