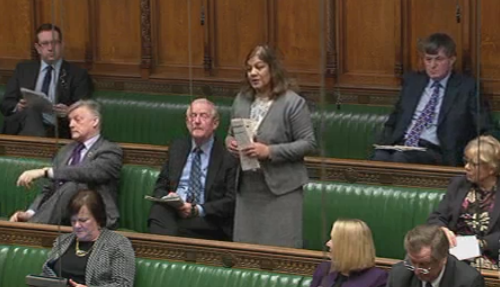 On Wednesday 11 February 2015, Valerie asked the Cabinet Office Minister about Public Service Mutuals.
Valerie asked: “What his policy is on promoting the formation of public sector mutuals.”
The Minister Replied: “The Government is committed to supporting the growth of public service mutuals. They deliver benefits to front line staff, to commissioners and to service users. There are now more than 100 live mutuals delivering over £1.5 billion of public services, and over 35,000 staff who have themselves taken the decision to join a mutual.”
Valerie then asked: “With the flag ship Hinchinbrooke Hospital in special measures, could the minister say whose idea is was to write to all the Foundation Trusts and NHS Trusts asking them to be pathfinder mutuals, and how many people have replied?”
The Minister Responded: “The failure of Circle at Hinchinbrooke hospital, where the company very near managed to remove an operating lose inherited from the public sector was due to the failure of the NHS to deliver its side of the bargain. Not my words but the words of Tom Levitt, the former Labour MP for High Peak. A lot of NHS trusts have applied for the Department of Health and Cabinet Office Mutual Pathfinder Programme. There are huge benefits for patients in this movement, thats what we should be concerned with, not an outworn and outdated ideology.”
Valerie said: “The Minister did not answer my question or offer to write to me.”