HomeNewsValerie questions the GMC at the Health Select Committee

Valerie questions the GMC at the Health Select Committee 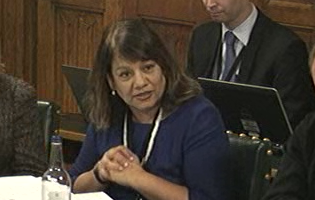 On Tuesday 6 January 2015 the Health Select Committee, of which Valerie is a member, heard evidence from the General Medical Council (GMC) at the annual accountability hearing.
Valerie said:
“On the topic of complaints, I asked the GMC if they could breakdown the numbers of doctors that are referred to them. I was told that the doctors that were more likely to be referred to them were older doctors, not younger doctors; they are men, not women. International medical graduates and BME doctors born in the UK are also overly represented in the GMC complaints procedure. The data the GMC has collected show that shortly after somebody is made a consultant or GP there is a spike in the number of complaints. Niall Dickson, Chief Executive and Registrar of the GMC, told me the GMC is currently looking into why this is the case and what efforts can be put in place to rectify this situation and support medical professionals.”
“I raised mentoring for doctors at particular times in their career. A study at King’s College medical school has shown that young people who maybe had not got their A levels but by the time they had done the foundation course they were exactly the same as everybody else who got absolutely A-stars. These students who do well enough in their first year can transfer to the medical school if they wish. Students might not perform well at A-levels for a range of socio-economic reasons but not they have the opportunity to reach the standard necessary to study medicine and when they are on the course they are indistinguishable from the other students.”
“I do not think there is anyone in the NHS who can actually give me an answer on how many locums are working in the NHS. This is quite important in terms of accountability. Niall Dickson told me that locums do have to go through the GMC’s revalidation. GP locums are required to provide the same evidence that any other doctor does at their appraisal. It is clear that there needs to be more feedback of locums as organisation who come across bad locums simply do not employ them again but they can still work in other areas of the NHS.”
“The GMC evaluates and deals with complaints and has just put an additional £2 million into the fitness to their fitness to practice operation to manage the increase in serious cases that have arisen. The GMC has a time limit of 12 months to look at a case but in serious cases it would be beneficial to all concerned if they were expedited. This would require stricter limited on case management from all parties. Proposals for this have been laid down in the Law Commission Bill which the Government failed to include in the Queen’s Speech or make time for in Parliament. The GMC does not currently have the power to set strict deadline for document disclosure that would help speed up the cases.”
“ I know the GMC has asked for the right of appeal from the Medical Practitioners Tribunal Service (MPTS). The GMC said they need this as their primary purpose is to protect the public. The Chair of the MPTS also supports the right of the GMC to appeal. While both sides should have the right to appeal the decision, I asked if another procedure, such as making an application, might be more appropriate given that costs and length of time is an issue for all the parties involved. The right to appeal was required for sanction rather than process.”
More information of the Health Select Committee’s annual accountability hearing with the General Medical Council can be found here: http://www.parliament.uk/business/committees/committees-a-z/commons-select/health-committee/inquiries/parliament-2010/2015-gmc/