HomeNewsValerie raises awareness of epilepsy in a debate

Valerie raises awareness of epilepsy in a debate 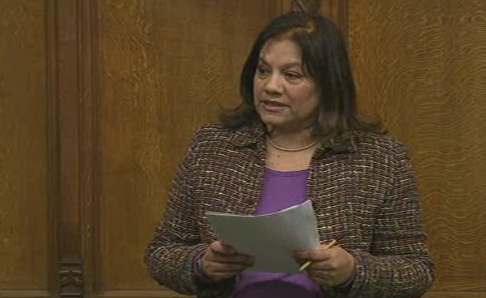 On Thursday 26 February 2015 Valerie Vaz, Member of Parliament for Walsall South and Chair of the All Party Parliamentary Group on Epilepsy, spoke in a Back Bench Business Debate secured by Laura Sandys, Member of Parliament for South Thanet.
Valerie said:
“This was a timely debate and it came between two important dates and the publication of a number of excellent reports. The World Health Organisation adopted a resolution on 2 February this year, and world epilepsy day is on 26 March, when we are all urged to ‘colour it purple’. The WHO launched a campaign on 9 February 2015 to improve the epilepsy treatment gap and it urged member states to look into the matter.”
“During my speech I covered different stages of epilepsy services: those for young people; the transition from young person to adult; and adult services.”
“For young people a recent report, “Improving epilepsy care for children and young people”, published by Young Epilepsy, University College London and Whittington Health highlighted unacceptable levels of misdiagnosis, inadequate communication, a variation in care and a fragmentation of services. There are 112,000 children and young people who have epilepsy, it is important that they each receive an individual plan as a one-size-fits-all approach is wrong.”
“During the transition from young person to adult, Epilepsy12 found that there were inadequate services and transition arrangements for young people. More attention needs to be given to handover clinics, which could comprise both adult and paediatric health professionals. The loss of the continuity of care at transition needs to be addressed to ensure that new relationships with the clinicians are established.”
“For adults, a report by Epilepsy Action on clinical commissioning groups and commissioning in November 2014 found that only three out of 140 health and wellbeing boards are making plans for people with epilepsy. Some 78% of CCGs have not developed and do not intend to develop a written needs assessment for people with epilepsy—that must change. Evidence also shows that people with epilepsy have poor access to epilepsy specialists and epilepsy specialist nurses, and do not have regular reviews of their epilepsy.”
“The sudden unexpected death in epilepsy is an important issue, as was highlighted by SUDEP Action. The national sentinel audit of epilepsy deaths in 2002 found that 42% of such deaths were potentially avoidable. Brain surgery is another area where there is a lack of availability, with only 300 operations being carried out on adults each year. It is estimated that approximately 5,000 adults could and should benefit from the only cure there is for their epilepsy.”
“There is hope for the future. The Epilepsy Society is undertaking active research. Its report highlighted a number of firsts, such as the first brain and tissue bank for epilepsy. It has created the first multilingual digital information resources for epilepsy, and it hopes to unravel the genetic architecture of the epilepsies and bring new hope for people with the condition.”
“In my Ten-Minute Rule Bill I called for direct referrals to a tertiary specialist to avoid delays. That has not been taken up yet, so we need referrals from a GP specialist to a tertiary specialist without the need to go through a generalist consultant.”
“Epilepsy is a life-threatening neurological condition that can affect anybody at any age without warning. I hope we have today brought epilepsy out of the shadows of stigma and discrimination, and into the spotlight of knowledge, awareness and hope for the future.”
Further Information
The World Health Organisation on Epilepsy: http://www.who.int/topics/epilepsy/en/
Epilepsy12 National Clinical Audit: http://www.rcpch.ac.uk/epilepsy12
Epilepsy Action: The local picture: epilepsy.org.uk/localpicture
SUDEP Action: https://www.sudep.org/
Epilepsy Society: http://www.epilepsysociety.org.uk/
More information about Valerie’s 10 Minute Rule Bill is available here: http://services.parliament.uk/bills/2010-12/epilepsyandrelatedconditionseducationandhealthservices.html