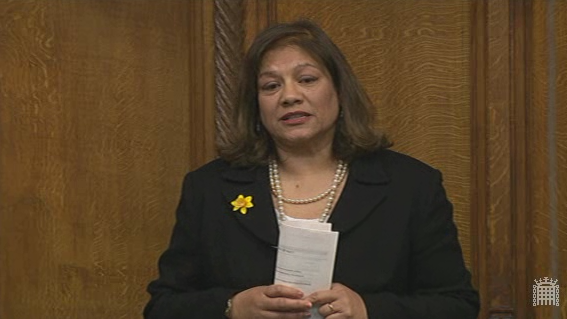 On Tuesday 4th March, Valerie drew question 10 at Foreign and Commonwealth questions in the House of Commons.

“What discussions he had during his recent visit to Burma.”

“During my second visit to Burma in January, I met Aung San Suu Kyi, key Ministers, the Speaker, and the Commander-in-Chief. I discussed the need for constitutional reform and continued progress in the peace talks, and I raised in strong terms our concerns about human rights and about the situation in Rakhine state. I was also the first British Minister to visit Kachin state since Burma gained independence in 1948. Among other things, I met a group of Kachin world war two veterans, and paid tribute to their exceptional and brave service during the war.”

“I thank the Minister for his response, and pay tribute to you, Mr Speaker: if you had not raised the issue of political prisoners with the general and Ministers during your recent trip, they would not have been released.”

“May I urge the Minister to press the Burmese Government? There is still concern about the census. Many people have been displaced, Médecins Sans Frontières has been suspended from Rakhine, and there needs to be constitutional reform by 2015 if there are to be free and fair elections.”

The Minister of State subsequently replied:

“We approach this issue in a spirit of agreement, and, in accordance with the pledge that I had given the hon. Lady previously, I was able to raise the issue of political prisoners. I believe that there are still 30 whose cases are disputed.”

“As for the census, the hon. Lady will be aware that we are providing funds for it, and that it is the first census to take place for a very long time. There are issues surrounding it, but we believe that it is the right course. I believe that our engagement with Burma is on the right lines, but serious issues remain, not least the continuing problems in Rakhine.”