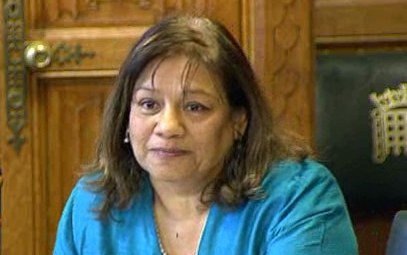 On Wednesday 14 January 2015 the Health Select Committee, of which Valerie is a member, heard evidence from Evidence given by Dr Clifford Mann, President, College of Emergency Medicine, and Professor Chris Ham, Chief Executive of The King’s Fund.
” It appears form the evidence of a trust that NHS staff have been coming in early and staying late to help their hospitals cope with extreme winter pressures. If it was not for the hard work and dedication of NHS Staff then the current situation in the NHS would be a lot worse. I am concerned that people are working in the NHS for nothing. This is not acceptable and I asked the Department of Health to look at this.”
“In June 2014 the Secretary of State for Health announced a £700 winter pressure fund for the NHS. This money was given to CCGs and the purpose of the money was to reduce the number of A and E attendances and admissions over the winter period. Dr Mann told me that this had not been entirely successful. Dr Mann said that there are many emergency departments which appear to have seen none of the money. Patients seen in A&E within 4 hours was at their lowest levels since records began. Dr Mann would have like to have seen the money been put into front-line services or into getting patients back to a community setting.”
“The current tariff system was designed to discourage admissions to hospital. In reply to my questions on the tariff Dr Mann said that the current system was ‘wholly unsuited to the purpose to which it is intended to be applied’. Dr Mann agreed with me that the 2009 threshold is purely arbitrary and does not take into consideration the change in demographics or hospital arrangements in the intervening 6 years. This can lead to penalising some hospitals. The tariff itself also not based on any particular evidence and it is not clear that it is successful in achieving its aim.”
“Locum doctors represent 25% of senior doctors positions in A and E, which cost the NHS £150m last year. Dr Mann told me that this was enough money to double the number of NHS A and E consultants and still save money. The NHS is spending money on short term fixes rather than long term solutions. The NHS has spent £250m on training 500 doctors who now work in emergency medicine in Australia, 92 % of these have no plans to return to the UK. This added to the spending on locum doctors and winter pressures equates to over £1bn, which is more than costs to run ever emergency department in the UK. Dr Mann asserts that 50% of the money we spend on emergency medicine is inefficiently spent and we could spend less a ‘have a safe, sustainable system at lower cost and higher efficiency’.”
“Professor Ham told the committee that if A and Es have senior medical presence at the front door of hospitals, including geriatricians and psychiatrists, this greatly aids the time it takes to treat patients and the flow of patients throughout the hospital.”
More information of the Health Select Committee’s inquiry into Accident and Emergency Services is available here: http://www.parliament.uk/business/committees/committees-a-z/commons-select/health-committee/inquiries/parliament-2010/accident-and-emergency-services/