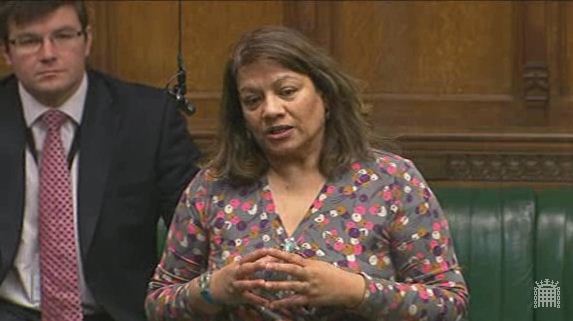 Valerie raised the issue of the Zebra Crossing on Darlaston Road, near the junction with Hough Road, in the House of Commons for the second time after Walsall MBC refused to upgrade the existing Zebra Crossing to a Signal Controlled design.

“Despite this, Walsall MBC continues to refuse to upgrade the Zebra Crossing on Darlaston Road to a Signal Controlled design such as a Pelican Crossing or a Puffin Crossing. Two local residents have already suffered serious injuries on the crossing and there is a risk that more people will be seriously injured or even killed if it is not upgraded to a Signal Controlled Crossing.”

“I raised the issue of the Zebra Crossing on Darlaston Road with the then Leader of the House of Commons, the Rt Hon Sir George Young MP on 5 July 2012. The Government responded that it is for Walsall MBC to decide whether to upgrade the Crossing and that it is unable to provide additional funding to Walsall MBC for this purpose. It is time that the first new Signal Controlled Crossing in 2 years is installed in Pleck.”

“May I raise again the issue of a signal-controlled crossing on Darlaston road in my constituency? A four-year-old child was knocked over and suffered serious head injuries, and a woman suffered a fractured pelvis—all this on the crossing. Three hundred local people have signed a petition, yet the council refuses to upgrade the crossing to a signal-controlled crossing. I have written to everybody—the Department for Transport, the council—and still they refuse. Can the Leader of the House use his good offices to point me in the right direction, perhaps with an urgent debate, or tell me where to go next before there is a death on the crossing?”

The Leader of the House of Commons, the Rt Hon Andrew Lansley MP replied that he would raise the issue with his colleagues in the Department for Transport.