Valerie raises Darlaston Road Crossing in the House of Commons 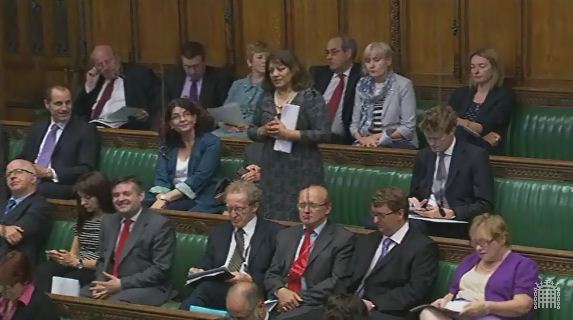 The Darlaston Road Zebra Crossing in Pleck was raised by Valerie on on Thursday 5 July 2012  in the House of Commons.
Valerie said:
“I raised the matter of the dangerous Zebra Crossing at Darlaston Road at Business Questions in the House of Commons on Thursday 5 July 2012. I asked the Leader of the House of Commons, the Rt Hon Sir George Young MP for an urgent debate on accessing funds for upgrading dangerous crossings. He responded that he would look into whether there is any way the Government could make progress on having the crossing upgraded. I hope that he will revert to me with a further positive response.”
“Walsall MBC continues to refuse residents’ requests for the existing Zebra Crossing on Darlaston Road in Pleck, near to the junction with Hough Road, to be converted to a Signal Controlled Crossing. This is despite five accidents having taken place on the crossing in 5 months from September 2011 to February 2012, including an incident on 8 September 2012 in which a four year old boy was hit by a car and an incident in which a woman was hit by a car and left with broken bones.”
“Walsall MBC needs to work with the local community to find ways to improve the situation at the Crossing. It is only a matter of time before someone is seriously injured or killed because the Crossing is simply not suitable to protect pedestrians from the speed and volume of traffic using the road.”
Please click here to view the Hansard transcrip of Valerie’s question and the Leader of the House’s response.