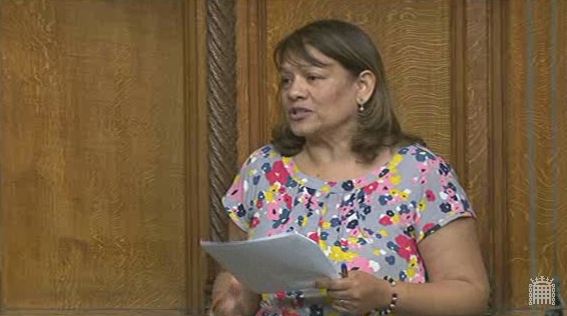 “I raised the issues of consultations by local authorities, the NHS, and access to treatment and services at the Pre-Recess Adjournment Debate because my constituents had raised their concerns with me. Residents contacted me because Walsall MBC failed to take their views into account. Residents have valuable knowledge of their local areas but flawed consultations mean their voices are not being heard. And in the NHS there is now a worrying lack of information and transparency.

“On consultations, I raised three specific examples. At Stafford Road in Darlaston and at Walstead Road in the Delves, speed humps have been installed which have caused difficulty for local residents. At Stafford road, I met council officers for a further consultation on removing the speed humps because of the noise and vibration they created. The consultation resulted in 34 out of 43 residents wanting them to be removed. 148 people were contacted and 43 responded, but the council counted the 105 non-responses as though they were in favour, and therefore kept the speed humps against the wishes of local people.”

“On Walstead road a consultation took place in July for three weeks. Some people were on holiday and some were about to go on holiday. A local resident carried out a survey after they were installed, and 97 people responded, of which 73 reported that they had difficulty with noise or when they reversed their car out of their drive. Residents came up with a valuable suggestion about having different solutions for different parts of the road. If only they had been consulted and listened to properly in the first place.”

“At Darlaston Road residents and I are campaigning for a signal controlled crossing. Residents contacted me to say that there had been a number of incidents, including one in which a four-year-old boy had to be airlifted to hospital after a car had hit him. There have been other near misses. Residents want a signal-controlled crossing and presented a petition with 300 signatures to that effect, but still nothing has been done. My constituents must be listened to. I asked the Deputy Leader of the House to ask ministers to issue proper guidance on local authority consultations.”

“When my office rang the information lines of neighbouring local authorities—Birmingham, Sandwell, Stafford county council and Wolverhampton—they were told that non-responses were not counted as responses in favour, and they placed all their consultations on their website. Bristol city council has seven principles, the first of which is that consultations should be well timed and sufficient time should be allowed for people to respond. That, along with the other six principles, is eminently sensible. Guidance should be issued throughout England to make sure that non-responses are not counted as responses in favour.”

“Our constituents need more information and transparency in the NHS. Many complained to me about their local GP service, Sai Medical. Their complaints went unheeded by the Surgery. They were told that they had to complain to the Patient Advice and Liaison Service. They were never seen by the same doctor, only by a continuous supply of locums. I had to have a meeting with the local clinical commissioning group, which told me that Malling Health, a company based in Kent, had a contract with NHS England.”

“The CQC found that Malling Health at West Kingsdown medical centre used to hire staff who were not qualified to work with patients and had not been through recruitment checks, and there were no effective systems in place to prevent infection. Malling Health terminated the contract at the Brambles surgery in Essex. My constituents were right to complain, yet their voices were not heard. I have written to the CQC asking for an investigation into Malling Health at Sai Medical.”