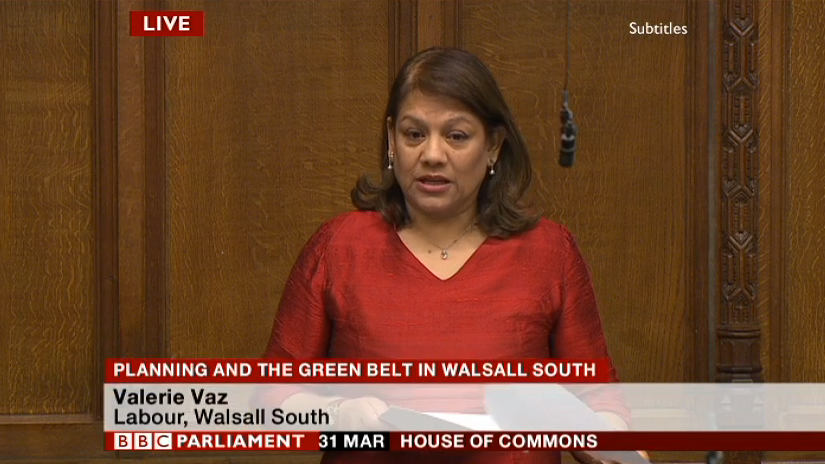 “What concerns me in the Great Barr Park and Hall Application is the use of enabling development to build on the Green Belt. The developers are arguing that the Hall is of such historic importance that the construction of 59 houses on the Green Belt is justified to enable its restoration. But the developers’ own historical consultant Peter Allen said in 2001 that ‘all doors and fireplaces have been stolen; floorboards, ceilings and staircases have disappeared’. Great Barr Hall, he said, was ‘a derelict shell—that is the reality’. The position is exactly the same in 2014. English Heritage, despite having refused to meet with me and with residents without Council Officers present, has confirmed to me that nothing of historical significance remains in the building. Successive owners have not restored it.”

“More importantly, the application does not meet the criteria for development on the Green Belt set out in Paragraphs 80, 88 and 89 of the National Planning Policy Framework. There are no very special circumstances. If allowed, the development will extend Walsall, Birmingham and Sandwell into the countryside and the gap between them will be eroded. It will not safeguard the countryside from encroachment, nor would it assist with urban regeneration by encouraging the recycling of derelict and other urban land—all set out in the NPPF.”

“I am concerned that Walsall MBC have shown that they may not be acting in the interests of residents but of developers. How else would you explain that the Notice of a Planning Application was sent out on 23 December 2013? A letter addressed to the developers on the Council website stated ‘we would very much like to continue to work with you towards delivering an acceptable proposal.’ On the website of the Great Barr Hall Action Committee it is stated that Walsall MBC have endorsed developers’ plans”

“There is an ancient woodland on the site called Gilbert’s Wood which has a bluebell wood, which Rev. Rutter, Vicar of St Margaret’s Church Great Barr, who is a botanist says has taken 200 years to establish with native English Bluebells. The plans show an access road will go right through it. I am pleased that the Minister offered assurances that the Green Belt is safe and offered practical advice. St Margaret’s Church, which is the real focus of the Scott family history provides a setting for contemplation and serenity. That will all be lost as a result of a few people making life intolerable for the many, and for the generations to come.”

The full text of Valerie’s speech and the Minister’s response are available to view here.