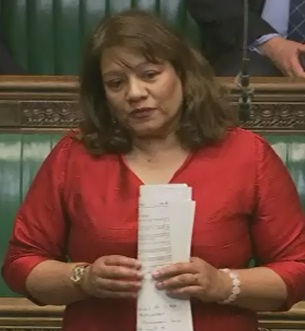 At Deputy Prime Minister Questions on Tuesday 10 July 2012, Valerie Vaz MP asked about the introduction of a British Bill of Rights and what impact it would have on the Human Rights Act 1998.

“It is important to determine what the implications would be in relation to human rights.  The Human Rights Act 1998 provides for absolute and qualified rights and the margin of appreciation doctrine under European Union law gives the government the flexibility to create laws that are in line with the United Kingdom’s culture and beliefs.  I asked the Minister if the Commission on the Bill of Rights would review whether the Human Rights Act can sit alongside the Bill of Rights in a happy coalition of rights and responsibilities.”

“The Human Rights Act 1998 brought into law the European Convention on Human Rights and should not be repealed. The Parliamentary Secretary of the Cabinet Office, Mr. Mark Harper, told me that the Commission on the Bill of Rights is investigating the introduction of the UK Bill of Rights in relation to our obligations under the European human rights convention.  I look forward to the Commission’s Report which is due at the end of December.”

You can read Valerie’s question and the Deputy Prime Minister’s answer here.