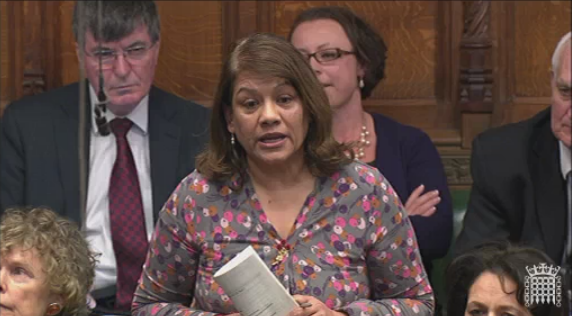 On Wednesday 26th February 2014, Valerie asked the Minister of State for Northern Ireland what recent discussions she has had with the family and representatives of Pat Finucane.

The Minister of State replied:

“Neither my right hon. Friend the Secretary of State nor I have held any discussions with members of the Finucane family or their representatives recently.”

Valerie followed up by asking:
“It is 25 years since the death of Patrick Finucane, and the Da Silva inquiry found shocking levels of state collusion. When will the Minister act on the growing calls for a public inquiry so that there can be justice for Patrick Finucane?”

Mr Robathan subsequently replied:
“Today, when people have been speaking of the four soldiers murdered in Hyde park, one of whom I knew—and let us not forget the seven bandsmen murdered in Regent’s park at the same time—we should remember that the overwhelming majority of soldiers, RUC and Ulster Defence Regiment, served with distinction and with honour, as Desmond Da Silva said.”
“Secondly, let me point out to the hon. Lady that the Prime Minister has already apologised twice for the collusion in the murder of Pat Finucane, which was of course disgraceful. The review by Desmond Da Silva found, I think, all the facts that needed to be known. The Secretary of State has indicated to the family that she will meet them should they wish to see her. However, there is a judicial review going on which queers this pitch slightly.”
Valerie said:
“Amnesty International have added their voice to calls for a public inquiry. This is the oinly way there can be justice and reconcilliation for Pat Finucane.”
Link to Amnesty International Public Statement: http://www.amnesty.org/en/library/asset/EUR45/003/2014/en/01a194dc-f8a6-4ba9-9e12-8700f794ba9c/eur450032014en.html