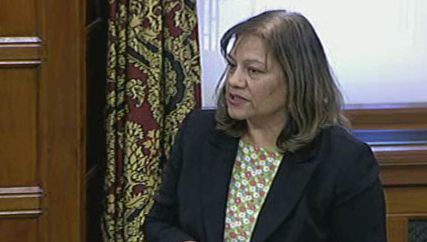 On Thursday 15 January 2015 a Westminster Hall Debate on national commissioning of NHS specialised services was proposed by Stephen Gilbert MP, St Austell and Newquay.
Valerie said:
“I want to congratulate the Hon Members for St Austell and Newquay for holding this debate and reminding us of the new proposals for co-commissioning for specialised conditions a change from commissioning by NHS England.
Every hon. Member making a speech here today speaks on behalf of people who suffer from rare conditions because those people cannot do so themselves. They have complex conditions; by their very nature, they are not run of the mill. They require highly specialised and very skilled clinical responses. Many other hon. Members have concentrated on specific areas. As a member of the all-party group on epilepsy, which also considers related conditions, I shall focus on that. Epilepsy encompasses so many variations, and there are a lot of unknowns about these conditions. Sometimes epilepsy is a forgotten condition because there are no shops on the high street to remind us of how many people—children and adults—suffer from it.”
“Epilepsy Action’s “Epilepsy in England: The local picture” report is quite alarming. I shall highlight just three of the major issues. Epilepsy Action says that only 10% of CCGs have a written needs assessment for people with epilepsy; just three out of 140 health and wellbeing boards are making plans for people with epilepsy; and 78% of CCGs have not developed, or do not intend to develop, a needs assessment for people with epilepsy.”
“According to epilepsy charities, there are also problems with the current national service specification for adult specialised neuroscience services. The problem is that it is an interim document. It was produced in 2013 and requires updating. More importantly, it does not specify which parts of epilepsy services are specialised and which are not. There seems to be a lack of accountability between CCGs and NHS England as to which are neurological services. The CCGs are interpreting, wrongly, that they have no responsibility for some neurological services but they have for others. That is why this debate is so important. How does the Minister intend to deal with that discrepancy? Will the specification be updated, and can he review that before he rolls out the programme?”
“The situation makes a mockery of my final point, which is about the tariff. NHS England and Monitor will bring in marginal rates of 50% for specialised services above the stated baseline. That, in effect, means that access may be rationed. Worse still, CCGs, if they underspend on their budget, can keep that money. That means that there is a perverse incentive not to commission the more expensive rather than the less costly procedures. Let us think about the kind of procedures required for epilepsy. Brain surgery is complex and highly skilled, and sometimes it is the only option for people with the condition.”
“I am not sure why specialised commissioning needs to change. I do not know whether the Minister is aware of the survey that the Specialised Healthcare Alliance carried out among patient organisations, expert clinicians and the industry in late 2014. It says that 90% of respondents want their service as part of specialised commissioning, not co-commissioning, and 82% do not want any change. I urge the Minister to listen to those patients and to those affected.”
The Official Record of the debate is available here: http://www.publications.parliament.uk/pa/cm201415/cmhansrd/cm150115/halltext/150115h0001.htm#15011566000267