HomeNewsValerie raises support for the breaved and survivors at PMQs

Valerie raises support for the breaved and survivors at PMQs 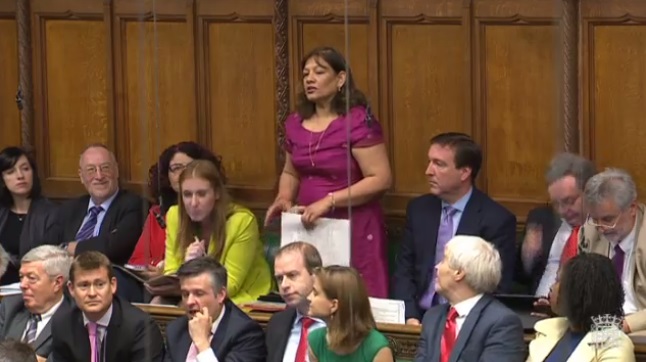 At Prime Minister’s Questions on Wednesday 8 July 2015, I was drawn at Question 5.

“Last Friday at Walsall Football Club’s Stadium there were tears, flowers and Walsall shirts and scarves as we remembered Joel Richards aged 19, his uncle Adrian Evans, and his grandfather Charles ‘Patrick’ Evans, all Sadler’s fans who were killed in Tunisia. So can I ask the prime minster if he could outline what steps he will take to ensure that bereaved families and survivors of atrocities can have help immediately and in the future?”

The Prime Minister responded: “I thank the hon. Lady for her question. The thoughts and condolences of the whole House go out to the families of her constituents. I am glad to hear that Walsall football club is facilitating this very fitting tribute. I was very moved when I heard about it on television. As I announced to the House last week, I have asked the Cabinet Secretary for advice on a ministerial committee to ensure that work is properly co-ordinated across Government to support all those who have been affected. When I was talking to the victims of the 7/7 bombings yesterday, I was very struck by the way that they had been supported across many years in many different ways, covering all sorts of different issues in their own lives and the way they wanted to commemorate those terrible events in London. I want to ensure that we do it as well in the case of the Tunisian atrocities, and that is exactly what that committee will be set up to do.”

I welcome the Prime Minister’s commitment to establish a ministerial committee to ensure that support for victims is co-ordinated across Government. As the Prime Minister noted, a high level of support has been provided for survivors of the London bombings 10 years ago and it is crucial that this support is matched for the bereaved families and the survivors of the attack in Tunisia.

I have been impressed by the support from Walsall FC for the family of Joel, Adrian and Patrick. Walsall manager Dean Smith and the entire playing squad and many fans and local people were present at the ceremony last Friday to pay their respects. It is shocking that this terrorist outrage has had an impact so close to home.

It is crucial that the Prime Minister delivers on this commitment and that this vital support is provided immediately and for the future.