Valerie raises the case of Mrs Brenda Pressdee in Parliament 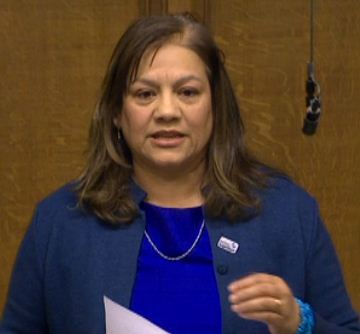 During the Pre-Recess Adjournment Debate in Parliament on Tuesday 26 March 2013, Valerie raised the case of an elderly constituent who was forced to sell her home owing to an unfair loan agreement.

“Mrs Brenda Pressdee, a senior citizen faces the prospect of having the home she has lived in for 38 years sold, but she cannot remember why. It is important to highlight this case because it could happen to any one of us, our family or our constituents.”

“It is unclear how Mrs Pressdee came into contact with Dream Money Ltd. It brokered an agreement and she had to pay £3,000 in fees because she signed a loan agreement for a second charge on her property of £36,000. Once the brokerage fee and all the fees for lawyers, solicitors and title insurance had been paid, the total charges and interest came to £32,995, which is 99.9% of the £33,000 Mrs Pressdee had initially requested.

“By December 2012, with interest and charges and charges associated with arrears, Mrs Pressdee’s total debt was £51,713.74. She is unable to keep up her payments and now has to sell her home under the mortgage rescue scheme while living there and renting it out. As a result, Blemain Finance will receive a £55,000 redemption from the sale of her home.”

“The situation is heartbreaking. Mrs Pressdee signed a piece of paper saying ‘I can confirm that I intend to repay my loan at the end of the term by the sale of my property.’ The note is dated 19 December 1007 and she clearly did not understand what was going on. I do not think that she received legal advice on the loan agreement.”

“The Office of Fair Trading’s (Irresponsible Lending Guidance) only came into force in March 2010, so she was not covered on the initial finance company’s actions. I do not think that she had the capacity to enter into the agreement. She was continually charged for every letter written. On two separate occasions she was charged £230 in legal costs, so the bills went up.”

“The OFT cannot help Mrs Pressdee. There is also the Consumer Credit Act 1974. Section 140A talks about the Unfair Relationships Between Creditors and Debtors. There are two cases which have been successfully brought which refer to this company. Under section 140A, Peter Bentley challenged the right to repossession of his property. The High Court Judge in Cardiff asked both parties to rewrite the loan agreement, and they have done so. The company was told it could not repossess Mr Bentley’s home.”

Valerie asked for the Minister to meet with her and the Pressdee family.

“We must help Mrs Pressdee, a vulnerable pensioner who has been driven out of her home. We should be protecting her.”

The full transcript of Valerie’s speech is available in the Official Report here.