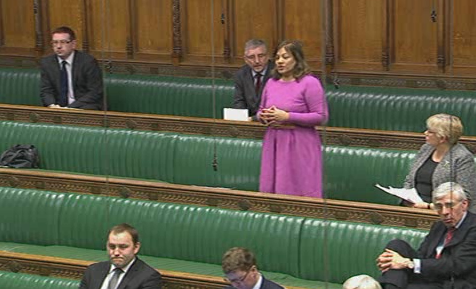 On Thursday 18 December 2014 at Business Questions, Valerie thanked the Leader of the House for the provision of an early debate on the recommendations of the Governance Committee’s report or which Valerie was a member of.
Valerie said:
“I thank the Leader of the House for arranging an early debate on the report. I pay tribute to my right hon. Friend the Member for Blackburn (Mr Straw) for his steering of the Committee, and for putting up with me in the private sessions as well as the public sessions. The report is important: it does not look backwards and it is not a slap in the face for anyone. We are making progressive recommendations, not least to ensure that Members understand that there is a split in the role and that they are both very important roles. I also appreciate the fact that the urgent debate will take place earlier, rather than later.”
The Leader of the House replied:
“I thank the hon. Lady very much for the part she has played on the Committee. It was clear that all members of the Committee were very engaged in its work. The recommendations are clear. As I said, I think they will be well received by the House. We will have the debate in January.”
The Report can be read here: http://www.publications.parliament.uk/pa/cm201415/cmselect/cmgovern/692/692.pdf