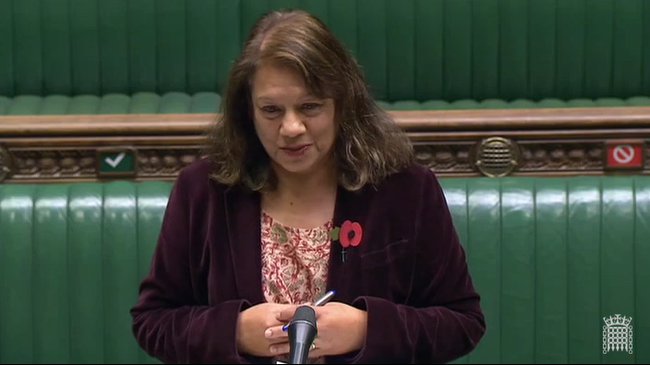 On Tuesday 10 November 2020, I responded on behalf of HM Opposition to a motion on lay membership of the Committee on Standards. I tabled an amendment to this motion which sought to appoint both candidates for lay membership of the Committee on Standards chosen in line with the panel of selection appointed by the House of Commons Commission. Unfortunately the Government voted against this amendment and it was defeated by 261 ayes to 334 noes. You can read my speech below:

“be appointed as lay member”

“and Ms Melanie Carter be appointed as lay members”.

I thank the Leader of the House for finally tabling this motion, but I am extremely worried and concerned about what he has done today. I was in politics in 1987, and the reason that I am taking this personally and have tabled this amendment is that this sort of thing has happened to me. It used to be known as blacklisting. I was prevented from having certain posts because people thought I had a particular political viewpoint. I thought that we had moved away from that and that this country had changed—that it did not really matter what someone’s politics were, but was about the kind of job that they did.

I am deeply concerned that some of the conversations that we have had in the Commission are public. The Leader of the House has said in some accounts that he apparently knows why Melanie Carter joined the Labour party and why she resigned from it; he appears to know exactly what those reasons are. The difficulty that we face is that Melanie Carter is not here to defend herself. She cannot question the Leader of the House or state what he has said in public; she does not have a chance to do that. That is not right in any forum, not least the House of Commons.

The Leader of the House failed to answer the question from the hon. Member for Harwich and North Essex (Sir Bernard Jenkin); he failed to say how the process was at fault or how it was flawed. Let me take hon. and right hon. Members through the process, because it is important for the House to know that there were 331 applicants. There was a sift and 10 applicants were interviewed. Those 10 applicants were actually whittled down through questions and an interview. That was all done by other impartial people, away from politics.

The applicants then went before an experienced panel that included Jane McCall, who is an external member of the House of Commons Commission. There was also my hon. Friend the Member for Stretford and Urmston (Kate Green), who chaired the Committee on Standards at the time. She had resigned because she had been given a new post, but we agreed that she would stay on even though my hon. Friend the Member for Rhondda (Chris Bryant) was the new Chair of the Committee. The other members of the panel were Mark Hutton, the ​former Clerk of the Journals, and Dr Arun Midha, who is a lay member of the Committee on Standards. The top two applicants were chosen: Melanie Carter and Professor Michael Maguire—in that order. I thank the panel all for their hard work, because sifting through all those experienced applicants is not an easy task. We should be pleased that all those people applied for the post.

As my hon. Friend the Member for Stretford and Urmston said earlier, it was very clear that it was not in the criteria for disqualification, and it cannot be. It reminds me of when Brian Redhead was on the BBC. I think he was accused of voting in a certain way, and he said to the now Lord Tebbit, “How dare you know how I voted? Nobody knows how anyone votes when they go into that booth with that pencil. It is a private matter—nobody knows.”

Let me go back to the way interviews were done. I want to thank all the panel for finding these two excellent candidates. This came to the Commission for discussion, which I will not go into, but concerns were raised. I will not say who the concerns were raised by. The panel members were asked to go and ask questions of the candidates again, and so they did. They did the due diligence and they came back. That is the process.

If Members are asking about impartiality, let me just set out exactly what Melanie Carter is. Her current role is senior partner and head of the public and regulatory law department at Bates Wells solicitors. She is an independent adjudicator for the Marine Stewardship Council. She is a tribunal judge. She is a founder member of the Public Law Solicitors Association. She has previously worked as a partner at DMH Stallard and a solicitor with Bindmans, as director of standards and deputy registrar with the General Optical Council, and with Mayer, Brown, Rowe & Maw solicitors. She also worked for the Government Legal Service. Her previous public appointments were as an independent member of Brighton and Hove Council standards committee, as the legal chair of the Adjudication Panel for England and as a magistrate on the south-west Bench in London.

Melanie Carter qualified as a barrister and a solicitor. As solicitors, we owe a duty to the court first. We have to uphold the truth and the rule of law. She does all that, and she does it independently. That is why the panel recommended her. Let me tell hon. Members exactly what the report says, through the Commission:

“The two candidates represent a combination of experience and qualities which should reinforce public confidence in the independent element in the House’s disciplinary processes.”

It is wonderful, isn’t it, when you know how someone is going to deal with a matter just on the basis of what their background is. With the greatest respect to the hon. Member, he does not know what is going to come before a Committee. The Leader of the House suggested that Melanie Carter might vote for an Opposition who were going to be good opposition for the current party, but actually, how does he know who is going to win the next the election? Nobody does, so he cannot say that she would vote for someone so that they would provide better opposition to the party that he represents.

I saw no bar when Tim Davie, who is now Chairman of the BBC, stood as a Conservative councillor; no one saw a bar to that. So what happened in someone’s past—and this applies to numerous people. I spent last Thursday going through how contracts were handed out to friends of the current Government—but we digress; I apologise.

I want to mention Professor Michael Maguire, because I do support the motion when it comes to appointing him. He was the Police Ombudsman for Northern Ireland and, among other things, he was a research officer at the University of Aston and he is currently the honorary professor of Senator George J Mitchell’s Institute for Global Peace, Security and Justice. So he, too, comes highly qualified, and we support his nomination.

I support the motion, and I intend to press the amendment in my name.”