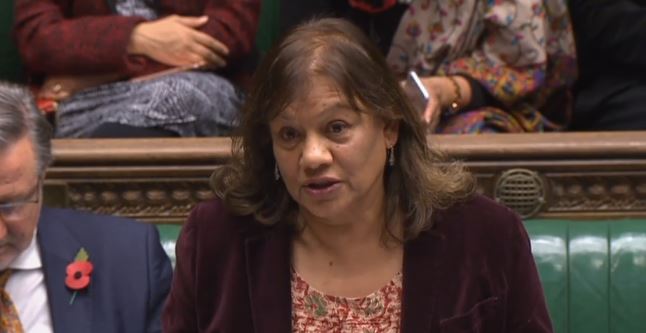 On Tuesday 29 October 2019 I responded to a Business of the House motion on the Early Parliamentary General Election Bill.

Valerie Vaz: I thank the Leader of the House for the business motion. The House is surprised and alarmed at the state of the Government for moving a motion for a general election in this way. The Leader of the House said yesterday that the Bill would be published this morning. It was a great disservice to the House that it was not available yesterday. It is just one line. We are now debating a programme motion to introduce the Bill in one day.

Yesterday, the Government called a vote under the terms of the Fixed-term Parliaments Act 2011, but they did not have the necessary majority. They did not get the magic 434 votes to give them a two-thirds majority in the House, so they are now introducing another Bill. Will the Government now repeal the Fixed-term Parliaments Act? This Bill will be pushed through in one day and will then come back from the Lords. The Leader of the House criticised the first and second European Union withdrawal agreement Bills, which similarly had few clauses, yet he and the Government ​are now doing exactly the same. As you have stated, Mr Speaker, the whole process will take six hours, with the Second Reading vote coming four hours after the start of proceedings, and with one amendment having been tabled. I think that this is another way to crash out of the EU without a deal, because the Government have not met their target of 31 October. This programme motion is unacceptable. It has been deliberately designed to avoid scrutiny of the Government.

Speaking of programme motions, the withdrawal agreement Bill is in limbo, in purgatory or in the ether. When this House was asking for a proper programme motion on the Bill that would have enabled hon. Members to have a proper discussion and to discuss, debate and amend where necessary, the Government did not want to give us that time. They did not want to deal with leaving the EU in an orderly way for businesses, farmers, working people and the environment. The Leader of the House will know that the hon. Member for Cheltenham (Alex Chalk) said yesterday:

“Surely the proportionate and sensible thing is to offer the House more time. If it does not vote for it, the Government will take their course, but surely they should at least try.”

The Leader of the House made it clear yesterday in his response to the right hon. Member for Aylesbury (Sir David Lidington) that he had no intention of bringing the withdrawal agreement Bill back to the House. Why? Why can we not have a proper debate on the Bill, with a new programme motion and with amendments being tested in a vote? Then we could see where the House stood on this issue.

James Gray: Will the shadow Leader of the House cast her mind back to the Second Reading debate for the withdrawal agreement Bill? Perhaps she will recall that Labour ran out of speakers some one hour before the end of the debate. Why does she therefore need more time?

Valerie Vaz: If the hon. Gentleman had listened to what I was saying, he would know that we need more time so that we can amend the Bill to take everyone’s views into account. We did not have an opportunity to amend it or even to vote on it.

We tried to have discussions, but the Government were not listening. Yesterday, in response to the hon. Member for North Dorset (Simon Hoare), the Leader of the House said that

“the reason for not bringing forward an allocation of time motion is that the House has made its mind clear: it does not want to deal or engage seriously with the withdrawal agreement Bill.”

How did he know that? I think that that is highly patronising. We have been begging for extra time so that we could have the votes, so that the House’s views would be clear. The reason that the Bill needed further discussion, as he knows, is that there would be a border down the Irish Sea—that was the reason that the previous Prime Minister ruled this out—or that it would result in the break-up of the United Kingdom. The Leader of the House should do the right thing by the House and reintroduce the withdrawal agreement Bill with a new programme motion that could be agreed with the usual channels and that took into account all sides of the debate. That would help the country to move on.