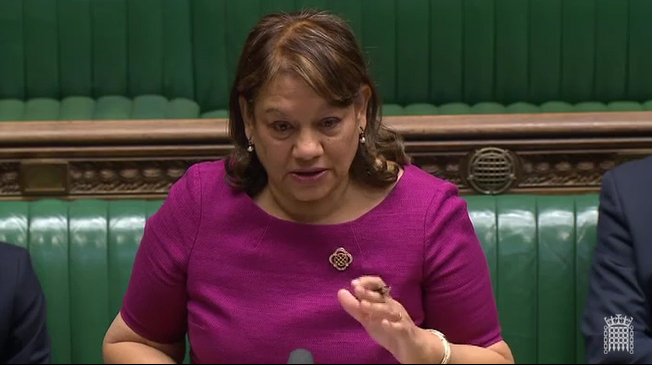 I responded to the second Business Statement of the New Year on 16 January 2020, pressing the Government to step up its efforts to bring Nazanin Zaghari-Ratcliffe home. You can read my speech in full below:

“I thank the Leader of the House for the business until 31 January and for the Opposition day. I know sitting Fridays are referred to on today’s Order Paper. After the right hon. Gentleman’s response to my hon. Friend the Member for Rhondda (Chris Bryant) last week, we had to do a quadratic equation to work out the length of the Session. The Leader of the House knows that there is a strong constitutional convention that Sessions usually last about a year.

Mr Speaker, it was helpful last week that you gave a time limit for the business, as you have done again today. However, I gently refer the Leader of the House to columns 630 and 634 of the Official Report on Thursday 9 January, where he simply repeats ministerial statements. That does not leave enough time for hon. Members to ask questions.

I know that the Leader of the House is keen on doing the right thing, whatever century we are in, and he knows that Ministers have to abide by the ministerial ​code. I therefore point him to section 6, which is entitled, “Ministers’ Constituency and Party Interests”. The general principle states:

“Ministers are provided with facilities at Government expense to enable them to carry out their official duties. These facilities should not generally be used for Party or constituency activities.”

I wonder whether the Leader of the House thinks that it is a breach of the ministerial code if a Minister uses ministerial facilities to go into another hon. Member’s constituency—for example, to visit a hospital—does not invite the constituency Member but invites the Member for the neighbouring constituency, who is a member of the Minister’s party. I have an example of that and I know that other hon. Members do, too. Will the Leader of the House say something about that?

Will the Leader of the House comment on a breach of public expenditure rules? The Commission’s statement on Big Ben is helpful for hon. Members—some may not have seen it. It states:

“There has been a suggestion that the cost of striking the Bell could be covered by donations made by the public. This would be an unprecedented approach. The House of Commons has well established means of voting through the expenditure required to allow it to function, and to preserve its constitutional position in relation to Government. Any novel form of funding would need to be consistent with principles of propriety and proper oversight of public expenditure.”

Will the Leader of House pass that on to the Prime Minister? I suppose that it was better to talk about that than the A&E figures, which are the worst figures ever. They are so bad that the targets are going to be scrapped. The Government cannot blame the last Government, because they were the last Government.

This seems to be a bung-a-bob Government. Bung a bob to Flybe and let it defer its tax payment—we would all like to do that. How can a Government bung a bob to a private company and not provide personal independence payments to my constituents and to those of other Members who are on palliative care and cannot access PIP? Can we have an urgent statement from the Work and Pensions Secretary as to why dying people are denied PIP?

I hope that there will be a full statement next week on exactly what the terms are for Flybe, because the accountability of Ministers and the Prime Minister coming to the House appears to be missing with this Government: bung a bob for Flybe; warm words and meetings for the steel industry.

Is the Leader of the House aware that the leader of Walsall Council said that families are suffering from food poverty because they are having more children than they can afford to raise? He was referring to families in Palfrey in my constituency, and saying that if someone is poor and from a black, Asian and minority ethnic background, they should not be having children, so it is okay for rich people to have children. There was nothing about the root causes of social and economic injustice. My constituents in that area are sometimes working two and three jobs. Does the Leader of the House agree with those words, or does he think that the leader of Walsall Council should apologise and resign? This is unacceptable.

Last week, I asked when the Prime Minister was going to update the House on his talks with the EU President. Can he please do that now? The Prime Minister may not want to come to Parliament, but at least the ​Iranian ambassador was interviewed by Jon Snow on Channel Four. The door seems to be opening for Nazanin and other dual nationals to return. Perhaps the Secretary of State for Northern Ireland could help out. He, along with my hon. Friend the Member for Rochdale (Tony Lloyd) and others in this House, has done a brilliant job of bringing accountability to Northern Ireland. I am sure that he has found that job easier than being Chief Whip.

The Holocaust memorial book is open next week in the Members’ Cloakroom, and I urge hon. Members to sign it. Let us all try to bring forward that new world, which is based on tolerance and self-respect.”